Catalyst on the Court 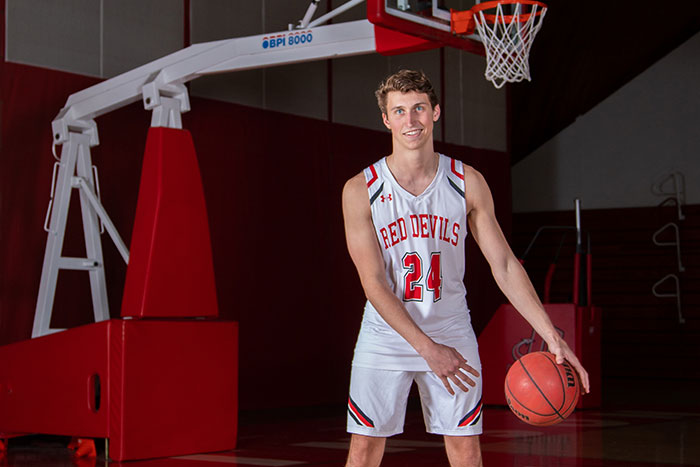 Ryan Robinson ’22’s basketball career at Dickinson can be described as nontraditional and challenging—but also inspiring and memorable. He has scored more than 300 points this season, averaging 12 points per game. And he led the Red Devils to the Centennial Conference (CC) playoffs for the first time since 2017-18. Standing 6 feet, 2 inches, Robinson earned second team all-conference accolades this year— well-earned recognition under the duress of nearly two COVID seasons.

“It was very hard to stay motivated and focused on basketball during COVID and our time at home,” Robinson says. “As a team we had Zoom meetings to stay in contact and did weekly yoga as a fun way to get together and get better. Individually, it was important to remind myself why I wanted to play basketball in college in order to stay motivated and enjoy working toward my basketball goals. It changed everything. But not only did we outlast it, we came out better because of it.”

“Ryan was our catalyst on the court, finishing in the top 15 in the league in scoring, assists, steals, blocked shots and rebounds, and his effort and passion inspired our guys,” says head men’s basketball coach Alan Seretti, who was named CC Coach of the Year this season.

“I was so proud to see Coach Seretti get that recognition, because it was a tribute to everything he has put into this program for the last 12 years,” says Robinson. “It’s also very telling about our resilience, to be able to bounce back from a 4-21 season two years ago to hosting a home playoff game in the Kline this season. Coach Seretti is a huge reason why I’m going to graduate from Dickinson. I have the utmost respect for him because of his dedication and how much he cares for his players on and off the court.”

Robinson recalls his favorite memory from this season was when the Devils upset No. 11 Swarthmore at home, giving the Garnet their first regular-season loss in the conference since 2019. “Celebrating in the locker room was something I’ll never forget,” says Robinson.

Basketball has always been a part of his life. Robinson’s father was a coach since before he was born and his older siblings played the game growing up as well, including his sister, who played DII hoops.

After graduation, the international business & management major is considering either a grad year abroad to continue playing basketball and get his master’s or taking a business analyst role near Washington, D.C.

I’m so thankful for the opportunity I had as a member of the basketball team at Dickinson,” he says. “All of the experiences and relationships that I have had over my four years have helped me grow as a person and will stay with me for the rest of my life.”