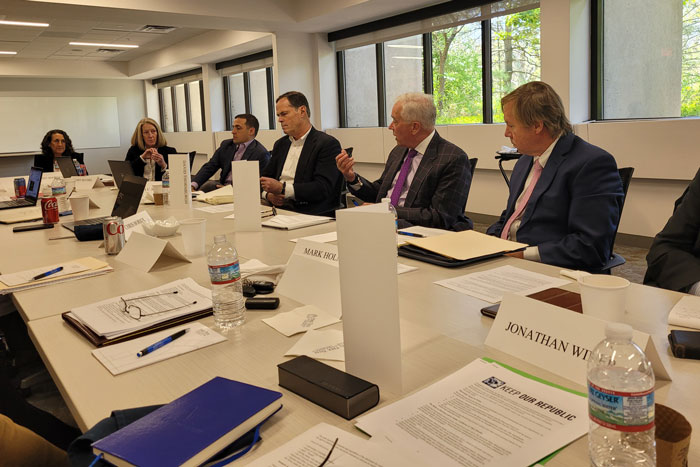 Keep Our Republic was founded in 2020, as a nonpartisan civic-action organization dedicated to discovering, highlighting and helping to “prevent an array of extraordinary threats to American democracy, strengthen democratic guardrails and educate the public before it is too late.”

The group emerged from the roiling wake of the 2020 U.S. presidential election and the subsequent Jan. 6 Capitol riots. Now, with high-profile former congressional and governmental figures at the helm—including former Congressmen Timothy Wirth and Richard Gephardt and former Senator Gary Hart—the group convenes regularly to discuss the state of the union, ways to preserve the republic and how to strengthen the systems of checks and balances that serve as the backbone of our nation.

Recently, Keep Our Republic met at Villanova University, with President John E. Jones ’77, P’11, in attendance, with the focus on exploring potential uncertainty and unconventional threats around the certification of electors and legal contests to the November 2024 election. With an eye toward “hoping for the best but preparing for the worst,” the convention discussed several potential scenarios and gamed out risk mitigation that county, Commonwealth and federal officials and the broader public could utilize.

“It was a robust and thoughtful discussion,” says Jones, noting that during the confidential meeting the group talked about challenging situations that could occur with the 2024 presidential election. “While members hope these things won’t happen, they talked about worst-case scenarios, including protests preventing voting, violence at voting places and multiple legal challenges to the election.”

Jones says that the group discussed ways to educate the public about the election process, the need for paper voting records and whether the courts will continue to be a bulwark against false claims.

“Instead of being reactive, this group wants to glean the lessons learned from the 2020 election and plan for ways to prevent or mitigate similar challenges,” he says. “Gatherings like this will be held in a number of states, with the goal of delivering action steps later this year.”