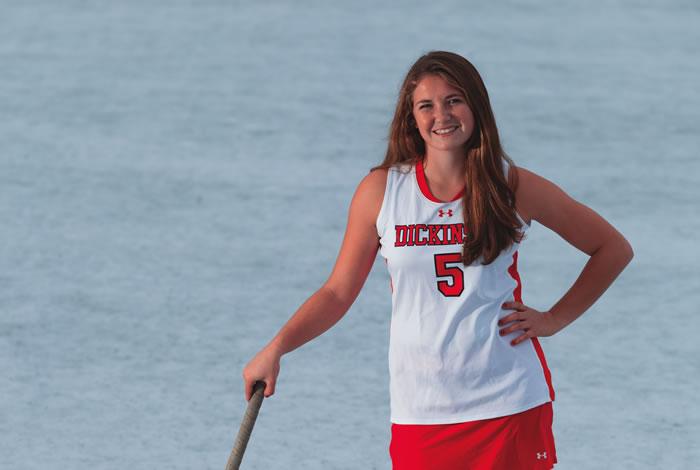 Click through the Dickinson field-hockey news feed and you'll start to pick up on a pattern-the name Caroline Karwel '16 comes up continually: In her first year at Dickinson, she dished off key assists, made tough defensive stops and led the Red Devils in scoring, with seven of the team's record-setting 44 goals.

The capper came on Nov. 6, when Karwel, at center back, was named to the 2012 All-Centennial Conference field hockey team and earned an honorable mention for defense.

"Caroline's high-school coach promised me that she was the type of player who would give everything to her team, on and off the field," says Caitlin Williams, Dickinson's head field-hockey coach. "She proved that instantly upon arriving here."

It was a great first year as a Red Devil, but Karwel didn't become the player she is overnight. "I started playing in eighth grade," she says. "All my friends were playing, and from then on I just loved it. I was not very good when I started, but somehow … things changed."

Karwel's skills grew as she played throughout high school, and she soon realized that she wanted to continue to play in college. "That's why I came to Dickinson," she says. "I knew I could play for four more years, get a great education and be able to be successful with the rest of my life."

As if being the team's leading scorer, making All-CC and earning accolades from her coach weren't enough, Karwel also was named Rookie of the Year by her teammates.

"I was surprised," Karwel says. "Coming in, [Williams] told me, 'You'll probably play,' and I thought, 'Great! I'll get some playing time, some experience.' And then I ended up playing all the time, and I feel like I really contributed to the team. My teammates all helped me become successful, and I helped them, which is what teamwork is all about."

"This year, Caroline was the only player on our team to play every minute of every game," says Williams. "She's the type of player and young leader that every coach wants on their team—poised in pressure situations, with great vision and timing."

In a season of both accomplishment and disappointment, the team finished 2012 at 7-11 but set new school season records for goals and points  (116) and combined for 28 assists, five short of the record. With the 2013 season approaching, Karwel thinks it could be one to remember. "I'm looking forward to meeting our recruits," Karwel says. "We have a strong incoming class, and I'm hoping that with them and our  current talent, we'll be able to increase our wins and become an overall better team."

Also keeping her eye on the future, Williams says, "We're looking forward to watching Caroline develop and grow over her next few years at Dickinson—and to the continued development of our program."