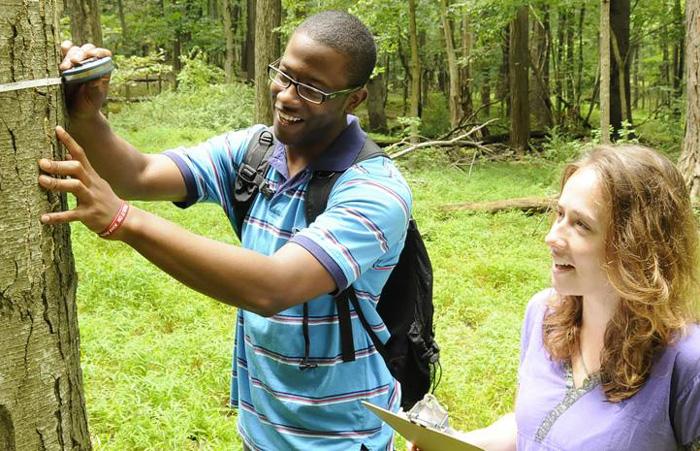 The enrollment numbers are in for Dickinson's Department of Environmental Studies & Environmental Science, and growth shows no sign of slowing down. As the department enters its 19th year on campus, the class of 2014 has more than four times the number of majors as did the class of 2007—jumping from 10 to 43.

"Several obvious reasons help to explain why the number of environmental studies and environmental science students is growing so rapidly," says Ashton Nichols, Walter E. Beach '56 Distinguished Chair in Sustainability and chair of the department. "Dickinson has one of the oldest and most well-established programs in the country, and the entire mood of our current student generation is a key factor in attracting students."

Dickinson's incorporation of sustainability issues into its very lifeblood is also playing a role. The creation of the Center for Sustainability Education and the increasing emphasis on sustainability in all aspects of college life also have attracted students to the school and the department.

Nichols cites the sustainability-infused curriculum, green-leaning campus facilities efforts, the organic farm and the presence of eco-reps in the dorms as factors that place the college's environmental stance front and center for current and prospective students.

"In both degrees," Nichols says, "students get a solid grounding in the intensive study of the environment (aquatic and terrestrial) and also in the historical and cultural backgrounds to current environmental issues and problems."

The fieldwork aspect of an environmental science or environmental studies major's curriculum can be vast, and, as Nichols says, "As is so often the case at Dickinson, students can supplement either degree with fabulous overseas study opportunities in places like Costa Rica, India and Great Britain, among others."

"Dickinson has a growing reputation for sustainability and an interesting assortment of opportunities in regards to working on sustainable projects," says Annaliese Ramthun '13, an environmental science major. "The majors tends to be pretty close-knit, because we spend a lot of time together in labs and share extracurriculars like environmental clubs or jobs with the farm and ALLARM."

Nichols also cites Dickinson's co-curricular and social opportunities, noting field trips to places such as the Chesapeake Bay and the Mississippi Delta and local internship options—at the farm and with the biodiesel program, for instance—as reasons the department has been so popular with students.