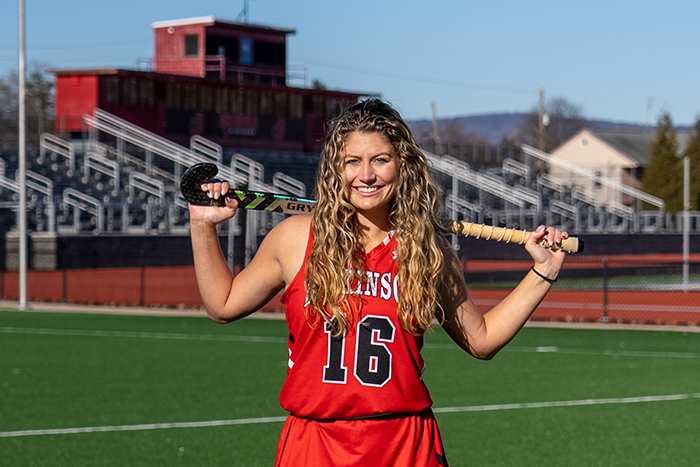 Dickinson athletes have earned countless accolades over the decades, with Red Devils being named All-Americans, Academic All-Americans, AllCentennial Conference and all-region, to name just a few. But it wasn’t until 2021 that a field hockey player garnered a CC Player of the Year title, on offense or defense.

“I was blown away, and I’m so honored!” says Hannah Spiri ’22 of her CC Defensive Player of the Year award. She also was named an All-American by the National Field Hockey Coaches Association, only the third such honor in Dickinson field hockey history. “I feel so lucky to have teammates and coaches that challenged me every day and made this award possible, and I’m excited to see Dickinson field hockey receive more recognition moving forward!”

Spiri says field hockey has always been a big part of her family, and she’s been playing since she could hold a stick. Her mom—a college player herself—introduced her to the sport, and her entire family has been the perfect support system since she joined her first team in second grade. Now as a Dickinson senior, the Morgantown, Pa., native has played in 54 collegiate games, starting all but one, and recently helped lead the Red Devils to their first-ever Centennial Conference Championship game.

“Hannah is exactly who our program needed, at the time we needed her,” says Carly Zinn, head field hockey coach. Zinn knew Spiri would be a key to the program from the moment Spiri visited campus as a high school senior with her family. “On the field, off the field, during the season, in the offseason, her impact is constant. Hannah is surrounded by amazing teammates and a strong culture, but she is the one who holds everyone together in good times and bad.”

This past season featured good times, and Spiri was a leader on one of the best teams in program history, earning four victories against nationally ranked opponents and advancing to their first CC championship game. For her efforts, Spiri was also named first-team all-conference and first-team all-region by the National Field Hockey Coaches Association.

Across her Red Devil career, Spiri totaled 23 points as a defender, with nine goals and five assists. Six of those goals came this season, leading the team. She also went five-for-six on penalty stroke attempts for her career, including a two-for-two performance against Gettysburg this season.

After graduation, Spiri looks to pursue a career in the medical field. But she still likes to look back at her choice to come to Dickinson and what it has meant to her. “I chose to come to Dickinson for numerous reasons, including the small class sizes and ability to form close relationships with the professors here,” says the biology major, noting that field hockey was also a huge part of her decision. “When I met the field hockey team, I immediately saw the family culture and wanted to be a part of it, which is what ultimately sold me on Dickinson. The final factor was a promise my grandfather made me: If I went to college close to home, he would come to every game. So Dickinson was the perfect choice for me.”

Read more from the winter 2022 issue of Dickinson Magazine.