Playing a Different (But Familiar) Tune 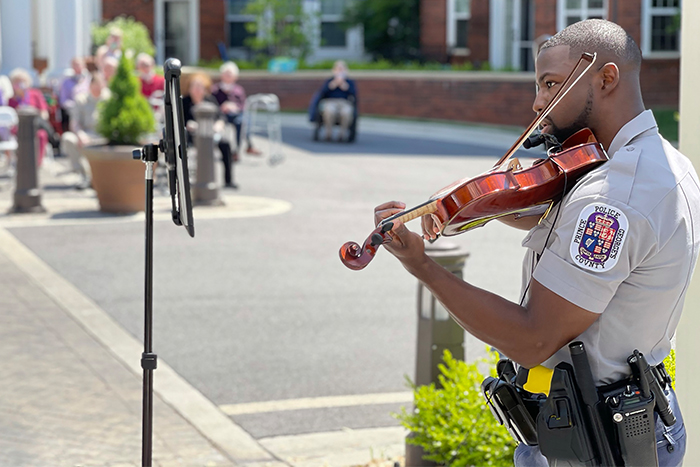 Alexander Strachan ’13 wasn’t expecting an epiphany on that scorching summer day in 2017. But when he witnessed several police officers assisting one of his elderly neighbors, a proverbial light bulb went off over his head.

“The officers did everything they could to keep her cool, with a fan and bottles of water. It was a side of policing I’d never seen before,” Strachan remembers. “I realized that there are human beings behind the badge, and they’re trying to help. That’s something I gravitate toward—I like to go out of my way to help.”

Strachan had already devoted his professional life to service of a very different sort, and now he was inspired to help in a new way. As he recently explained during a national news broadcast, he believes that his former career as a musician prepared him well for life in the police force.

Strachan began playing violin as a child, and after his grandmother was diagnosed with Alzheimer’s disease, he noticed that her focus and mood improved whenever he played her favorite songs. He learned a repertoire of well-known hymns, patriotic songs, decades-old show tunes and pop hits. And as a high-schooler he performed this uplifting playlist for nursing home residents. 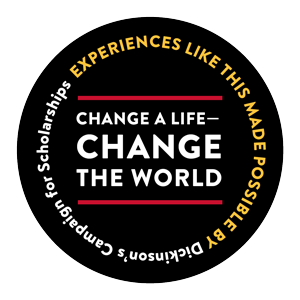 Strachan’s musical abilities—and his worldview—expanded in college, where he declared a music major, performed internationally and got to know students and professors from around the world.

“I grew up in Maryland, and I hadn’t met people from different cultures,” he explains. “The advantage of being at Dickinson is that it’s not a huge campus, but it has a diverse population. So if you get involved with different groups and organizations, it’s easy to get to know people and have intimate conversations with fellow students and professors that you may not have otherwise met.”

After graduation, Strachan founded Healing Strings Studio, which provides the comfort of live music to terminally ill children and adults and their families. Strachan performed personalized music programs in nursing homes, hospices and other medical facilities—sometimes at bedside—and also provided live music for memorial services. The work required a great deal of emotional capacity, but it was also rewarding, and Strachan had the professional and interpersonal skills it took to succeed.

Then COVID hit, and Strachan’s music was temporarily silenced due to social-distancing requirements. Fortunately, it was also around this time that he learned his application to the police academy, submitted soon before the height of the pandemic in 2020, had been accepted. Now, he’s a newly minted police officer, patrolling in Prince George’s County, Md.

Speaking during a two-part TV interview on CBS News, Strachan admits that it’s an uncommon career shift, but as he points out, he’s far from the only police officer with unexpected talents and passions. And, as he notes, many of the skills and talents he sharpened in his pre-police days remain vital. He still needs to quickly establish trust, decode nonverbal cues in real time and respond to the unexpected with calmness and professionalism. And he’s able to connect meaningfully with strangers in crisis and help make the best of difficult situations.

Strachan continues to perform through Healing Strings while serving as an officer, and he enjoys the variety and opportunities for connection and learning that both roles bring.

“When people contact the police, it’s usually because something unfortunate or difficult is happening, so you need to know how to talk with people who are dealing with hardships. That’s something I’ve been doing for a long time,” Strachan says. “To me, it’s about responding to a need and being the best you can be for the person you’re responding to—while adhering to the laws and policies, of course. That’s what I was doing before, and I’m still doing that, just in different ways.”

Read more from the winter 2022 issue of Dickinson Magazine.