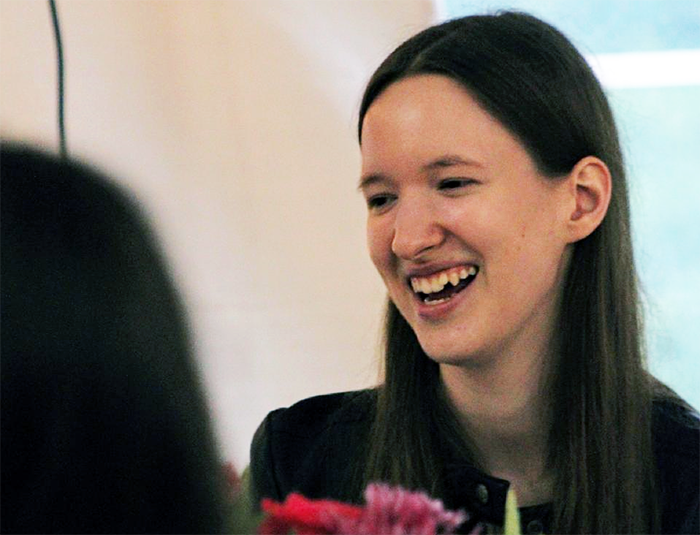 As a young child, Imogene Gross ’22 dreamed of being a mermaid. Now she’s a Dickinsonian, where “mermaid” is our middle name! A transfer student to Dickinson, Gross found her stride as an accomplished American studies major with a passion for travel and learning about national and global languages and cultures. Below, she discusses the summit that sparked her interest in Dickinson, her research on midcentury and early 2000s music and her internship at the National Archives.

I love American studies because it gives me tools to look at the world from the vantage point of several different academic disciplines. It’s a really fantastic major because I don’t have to compromise; I get to explore everything I’m interested in. I’ve been able to familiarize myself with a variety of approaches toward making sense of American culture and history (and those of the rest of the world, too).

In high school, the Gender-Sexuality Alliance (GSA) I helped lead took an annual trip to Dickinson’s annual GSA Summit. It was always an illuminating and fun time, and it made us feel like part of a greater community. I was particularly impressed by Dickinson’s archives. Those were my first times visiting a college campus and imagining myself in the place of the students there, and I remembered these experiences when it was time for me to choose a school.

At one of the tables or benches in Britton Plaza on a warm day in a nice spot in the sun.

Molletes. They serve them at lunch, but honestly, I would have them for any meal of the day.

During my first semester at Dickinson I took two classes that really inspired me, both taught by Adjunct Faculty in English & American Studies Stacey Suver. They were an American studies course, Cyberpunk Media and Culture, and a literature course on the Long Beat Generation. It was the middle of the pandemic, and after having finished community college in Zoom-land already, I was a bit fatigued, but in my own time I was just devouring the readings for these two classes like there was no tomorrow. I developed a deeper appreciation of Beat literature and can often be found carrying around The Portable Beat Reader. Also, watching Brazil for the Cyberpunk class really inspired me personally and—although it might sound weird—actually changed the course of my life (for the better).

The earliest answer I remember giving when adults asked that question was that I wanted to be a mermaid. Sadly, everyone insisted that this was not a viable career option. But I guess it ended up being at least somewhat fitting, since the mermaid is one of Dickinson’s traditions!

I’ve wanted to travel abroad but haven’t had the chance to. I am very excited for the trip I have planned to visit London after graduation. After that, I am looking into different working visas available to me so that I might be able to spend some time working abroad (my ideal job would probably be working at a library or museum, but I’m open to many options).

I have an amateur passion for linguistics. I don’t understand a lot of the more complicated linguistic theory, but I love reading about all the different permutations of English over time and location. I like learning other languages too (most recently I picked up some Icelandic), but so far, the only second language that’s really stuck has been Spanish.

In 2017 I interned at the National Archives in Washington, D.C. I was excited to learn more about the responsibilities of archivists. To this end I shadowed a senior archivist under whose guidance I digitized a Civil War records series, and I toured their audiovisual facilities where they do some really cool work, including preserving old audio mediums like wax cylinders. By helping staff the all-ages research room and gathering materials for public outreach events, I also learned about some of the more public educational aspects of archival institutions, which I was less acquainted with before my internship.

For my senior thesis in American studies I researched and wrote on the phenomena of the teenage tragedy song (a song form popular in the 1950s-60s that tells the tale of tragic, sudden deaths of teen lovers) and the second wave of emo of the early 2000s, a genre which also often reflects a preoccupation with death. I wanted to pursue this research not only because I had personal interest and passion in it, but also because I felt that both of these forms of music have been overlooked in much of the academic circles dealing with the cultural impacts of music. I found that both of these genres were connected by their association with frequently ridiculed gendered notions of emotionality, but also that they had many valuable emotional functions for their listeners.