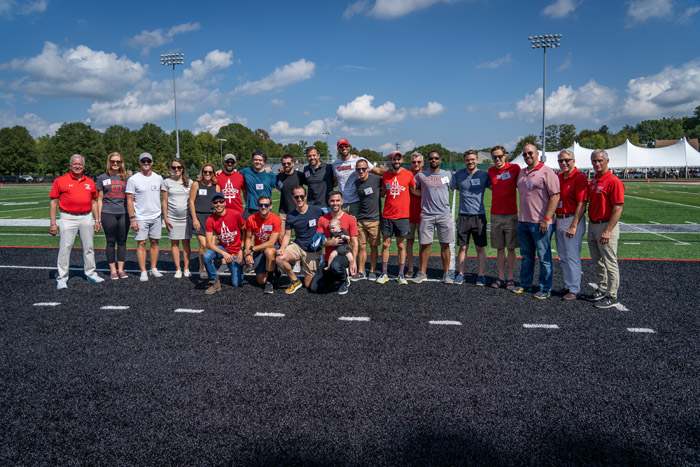 At Homecoming & Family Weekend, it’s all about tradition. And one of the most exciting traditions each year is the Sports Hall of Fame induction ceremony, honoring those Red Devils who rose to the occasion across the field of play and across the Centennial Conference (CC). This year, the ceremony included both the 2020 and 2021 inductees, as the 2020 ceremony was not held.

In the team category, the 2009-10 men’s cross country and indoor and outdoor track and field teams were inducted, notably having completed the triple crown—CC championships in all three sports. As a special remembrance, one of the triple crown members, Rob Jansen ’11, who passed away, was celebrated with a toast of what he called the “greatest beer of all time,” Dale’s Pale Ale.

Ian Mitchell ’10 earned the football team’s Rookie of the Year award in 2006 and went on to receive co-Most Valuable Player honors in 2007, 2008 and 2009. He was a three-time All-CC selection and became the first quarterback in conference history to rush for over 2,000 yards and throw for more than 5,000 yards in a career. He broke school records for total offense (7,668 yards), passing (5,089 yards) and touchdowns (66, rushing and passing) and in 2008 set school records for single-season total offense and passing yards.

Allison Jordan ’11 was a two-time softball team MVP and two-time team captain who was named CC Pitcher of the Year her senior year. The McAndrews Award winner made the first-team all-conference squad that year and made the CC Academic Honor Roll three times. She appeared in the CC championship game three times, with the team taking the title in 2011. Jordan threw two perfect games and 24 shutouts, racked up 56 wins and compiled a career ERA of an incredible 1.32 while averaging nearly eight strikeouts per game.

In cross country, Nick Karwoski ’10 ran to all-region honors in 2007, 2008 and 2009 and led the Red Devils to back-to-back conference titles, in 2008 and 2009. In indoor track and field, Karwoski was named CC Outstanding Performer in 2010 and graduated holding school records in the 3,000, 5,000 and the 4x1,600 relay. Outdoors, Karwoski was the Outstanding Track Performer at the 2010 championships and was the team’s Most Valuable Runner. He broke three conference championship meet records during his career, one indoors and two in the outdoor season.

Darcy McDonald ’09 was part of three cross country CC championships and three NCAA Mideast Region championships, and she made four straight NCAA national championship appearances. She was the team’s Most Valuable Runner in 2008 and was the indoor track and field team’s Most Outstanding Runner that same season. Outdoors, McDonald was part of a school record in the distance medley relay and broke the Little Three championship meet record with the 4x800 relay, capturing a team title in 2009.

Julie Martin McAllister ’96 was a three-time lacrosse regional All-American and a three-time All-CC selection. She still holds the school record for career goals. She ranked in the school top 10 eight times in single-season goals, assists and points, scoring a career-high and program-best nine goals in a single game. She still holds numerous spots on the single-season top-10 lists and the school mark for ground balls in a season with 88. She ranks second in program history for points in a game.

Andy MacPhail ’76 played baseball for the Red Devils, and his passion for the sport has led him to a long and successful career in Major League Baseball with the Chicago Cubs, Minnesota Twins, Baltimore Orioles and Philadelphia Phillies. He is currently the president of the Phillies organization. His tenure with the Minnesota Twins led to World Series titles in 1987 and 1991. With his brothers Bruce ’73 and Allen ’67, MacPhail has made significant contributions to the college, and Dickinson’s baseball field was renamed MacPhail Field in 2004.