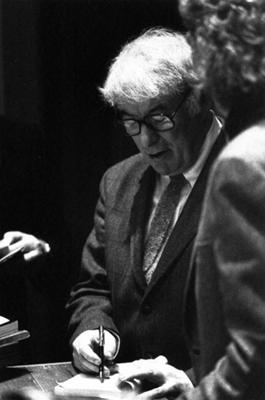 Irish poet and playwright Seamus Heaney, the recipient of the Nobel Prize for Literature in 1995, visited campus twice in 1993 and will return to Dickinson next spring as the 2014 Stellfox Award recipient.

In 1997, The New York Times proclaimed that poetry appreciators have “reason to rejoice at living in the age when Seamus Heaney is writing.” And next spring, literary Dickinsonians will have even more cause for celebration when Heaney returns to campus through the Harold and Ethel L. Stellfox Visiting Scholars and Writers Program.

The world-renowned poet and playwright's spring 2014 Stellfox residency, which will include readings, workshops and small-group discussions with students, will mark Heaney's third visit to campus since 1993 and his first visit since earning the Nobel Prize for Literature in 1995.

Dubbed “the finest poet now writing in English” (The New York Times) and “the greatest poet of our age” (John Sutherland), Heaney was born in rural Northern Ireland in 1939, the eldest of nine children. He began publishing poems singly while still a literature major in Belfast and swept onto the international poetry scene in 1966, when his multiple-award-winning debut, Death of a Naturalist, earned accolades for its gritty timeliness; fresh, plain language and dark, cutting wit.

Other acclaimed works followed, earning Heaney an international reputation as the most popular English-speaking poet since Frost, and in 2005 Heaney became the third Irish author to receive the Nobel Prize in Literature, following Yeats and Beckett. The following year, Heaney’s collection District and Circle earned the T.S. Eliot Prize and was named one of the 100 Best Books of the Decade by the London Times. Other honors include membership in the Irish Academy of Letters and American Academy of Institute of Arts and Letters.

The poet and playwright also is a noted essayist and translator whose translations of Beowulf and Sophocles’ Antigone are taught and performed across the English-speaking world. Heaney additionally has held residencies and professorships at Belfast University and at Harvard University, among others, and was the first Irish poet to be elected Professor of Poetry, Oxford University, serving in that post from 1989 to 1994.

He was teaching at Harvard in the 1980s when he met then-postgraduate-student Carol Ann Johnston, now professor of English at Dickinson and Martha Porter Sellers Chair of Rhetoric and the English Language. Johnston, who teaches Heaney’s work, is thrilled to welcome her celebrated mentor and friend back to campus, whom she describes as “one of the kindest, most empathetic people I know.”

Asked to pinpoint the source of Heaney's international success and universal appeal, Johnston explains that while his work is complex and stands up to multiple, in-depth examinations, it also is crystal clear and easily grasped, at least at one level, on first reading.  To explain, Johnston recalls taking a group of students by van to a Heaney poetry reading in Philadelphia. She had an extra ticket to the event and invited the van driver, who was not a fan of poetry, to the reading.

“The last poem he read was ‘The Swing,’” Johnston said. “And as we walked out of the reading, the driver, who said she had never read poetry, was in tears. He communicates at many levels, to powerful effect."