Dickinson in the News: September 2021 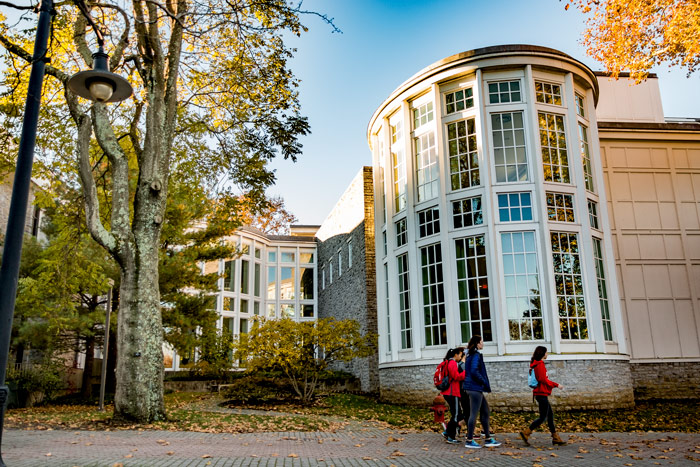 Dickinson’s presidential transition announcement made news across many national, regional, trade and local news outlets, including:

Interim President John E. Jones III ’77, P’11 discussed his transition from court to campus and his excitement for his new role on WITF’s Smart Talk.

The appointment of interim President Jones and the departure of President Margee Ensign made headlines in a variety of outlets, including Associated Press (AP), Bloomberg Law, The Philadelphia Inquirer, The Chronicle of Higher Education, Inside Higher Ed, The Legal Intelligencer, Premium Times, Pennsylvania Capital-Star, PennLive and The Sentinel. The AP story was published in 50 outlets nationwide, including The Washington Post, U.S. News & World Report and Pittsburgh Post-Gazette.

Professor Michele Ford shared her expertise with The Washington Post for its story, “How to handle the infuriating ‘here we go again’ feeling as the delta variant rages.” The article also was published in the Seattle Times and Boston Herald.

Professor Scott Boback discussed rattlesnake predators for a story published in National Geographic. Additionally, Project RattleCam, which Prof. Boback co-leads, was featured in National Geographic. Boback discussed the project, and how community scientists can get involved, on WITF’s Smart Talk, as well as in a “5 Questions With” profile published in The Sentinel and in stories published in the Steamboat (Colo.) Pilot and The Tribune (San Luis Obispo, Calif.).

Professor Marie Helweg-Larsen also was featured in National Geographic. She discussed her work on optimistic bias for the story, “Struggling to Assess Pandemic Risks? You’re Not Alone.” Additionally, an interview with Helweg-Larsen, titled “Why We’re Bad at Assessing Risk” was published in the outlet Bottom Line Inc.

Professor Shamma Alam discussed his research with the trade publication, Kinesiology Today, which reported on his recently published findings linking physical inactivity and the Great Recession with implications for the COVID-19 pandemic.

Professor Jeff McCausland had two op-eds published by NBC News THINK: “General Milley, critical race theory and why GOP’s ‘woke’ military concerns miss the mark,” and “Afghanistan’s Taliban takeover was predictable. How did Biden miss the red flags?” Another op-ed, “Former U.S. Military Leaders Sign Bizarre Open Letter Pushing Election Lies,” was published by HuffPost. He also was interviewed by FOX43 for their series of reports, “Birth of a militia; Men in uniform.” Professor McCausland also has conducted numerous interviews on the U.S. withdrawal from Afghanistan and its aftermath for CBS Eye on the World, CBS Radio and The Batchelor Show podcast.

Professor David Commins shared historical context on the Taliban takeover of Afghanistan in a report on FOX43.

A story by adjunct faculty member Amy Worden, “More than a century later, disinterment starts a Native American girl toward home,” was published in The Washington Post.

Professor Ben Edwards was a guest on the KFPA podcast, “A Rude Awakening.” He discussed the science behind the recent volcanic eruptions in the Democratic Republic of the Congo and in Iceland, and the eruptions' contribution to the climate emergency. Also, a video interview with Professor Edwards was published by the outlet Insider. Professor Edwards discussed the process, safety and tools used in collecting lava samples.

Professor Adrienne Su discussed poetry’s ability to translate "a question or problem into comprehensible form" and "[making] everyday vocabulary do something no one previously thought it could" in an interview for The Best American Poetry blog series, in which she’s been featured four times.

Professor Katie Schweighofer was quoted in the CNN online and CNN International story “There may be more Olympians who identify as LGBTQ than ever before. But there are limits to inclusion.”

Professor Susan Rose and College Archivist Jim Gerencser were interviewed by Scripps Television for the report, “Historic Native American Boarding School System Faces New Scrutiny,” which aired on more than 60 affiliate stations across the U.S. They discussed the history and complex legacy of the Carlisle Indian Industrial School (CIIS) as well as the Carlisle Indian School Digital Resource Center (CISDRC), which they have developed into the most comprehensive, digitized collection of all remaining known documentation from the CIIS. The CISDRC, Gerencser and Rose have been cited and quoted in numerous publications recently, including Native News Online, The New Republic, CNN Online, Associated Press, WHYY-FM, ABC27 and FOX43.

Professor Katie Marchetti was quoted in two stories published in The Washington Post, “Paganism, gods and goddesses aside, is the most LGBTQ-affirming faith in the U.S.” and “Pagan Politics Are Not As Uniform (Or Liberal) As You Think,” resulting from her latest paper, “A Political Profile of U.S. Pagans.”

Professor Ebru Kongar was interviewed by ABC27 for their report, “Pandemic Erases Decades of Growth for Women in the Workforce.”

Professor Matthew Pinsker’s Teagle-funded Knowledge for Freedom summer seminar was featured in The Sentinel. He also discussed the program launch as a live guest on WITF’s Smart Talk.

Two op-eds by Professor Crispin Sartwell, “‘Woke’ Corporations Use the Chinese Model,” and “Do Psychologists Cause ‘Mental Illness’?” were published in The Wall Street Journal.

Staff and administrators in the news:

Dean and Director of Academic Advising Tara Fischer discussed Dickinson’s new “Explore More” program in the story, “Some Colleges Ease Up on Pushing Undergrads into Picking Majors Right Away,” which was published in The Hechinger Report and The Washington Post.

Associate Provost and Executive Director of the Center for Global Study & Engagement Samantha Brandauer discussed the status of study abroad programs with CBS21.

Director of West Coast Recruitment Phil Moreno was interviewed by KSEE Fresno for “Accepted, Rejected, or Waitlisted: The Western Association for College Admission Counseling Has Great Advice for College-bound Students.”

Damon Yarnell, associate provost and executive director of the Center for Advising, Internships & Lifelong Career Development, was quoted in "A Rite of Passage Becomes Another Example of the Growing Divide" in The Chronicle of Higher Education.