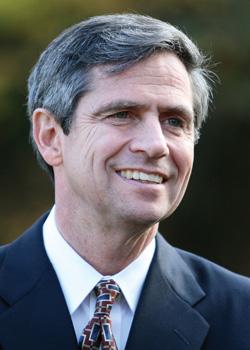 Joseph Sestak, a former three-star admiral and congressman, has been named as the 2013-14 recipient of the General Omar N. Bradley Chair in Strategic Leadership. While in residence, Sestak will conduct classes at Dickinson College, the U.S. Army War College and the Penn State University Dickinson School of Law and School of International Affairs.

Sestak served as a member of the U.S. House of Representatives for two terms, from 2007 to 2010, representing Pennsylvania's 7th congressional district. He served on the Armed Services and Education and Labor Committees and as vice chairman of the Small Business Committee. According to the Office of the House Historian, he is the highest-ranking military officer ever elected to Congress.

In 2010, Sestak won the Pennsylvania Democratic Senate primary with a victory over incumbent Senator Arlen Specter but lost his Senate bid in the general election. Recently, Sestak has been serving as distinguished practice professor in the School of Public Policy & Management at Carnegie Mellon University's Heinz College, where he taught ethical leadership and a policy practicum titled "Restoring the American Dream and Its Political Platform." He also has taught similar courses as an adjunct professor at Cheyney University of Pennsylvania.

Named in memory of the World War II hero, the General Omar N. Bradley Chair in Strategic Leadership provides a visiting scholar the opportunity to explore with students and faculty the nature of leadership and how it can best and most ethically be exercised in a world transformed by globalization, technology and cultural change. The chair also seeks to enhance the study of leadership, encourage civilian-military dialogue and contribute to the educational and research activities of the partner institutions.