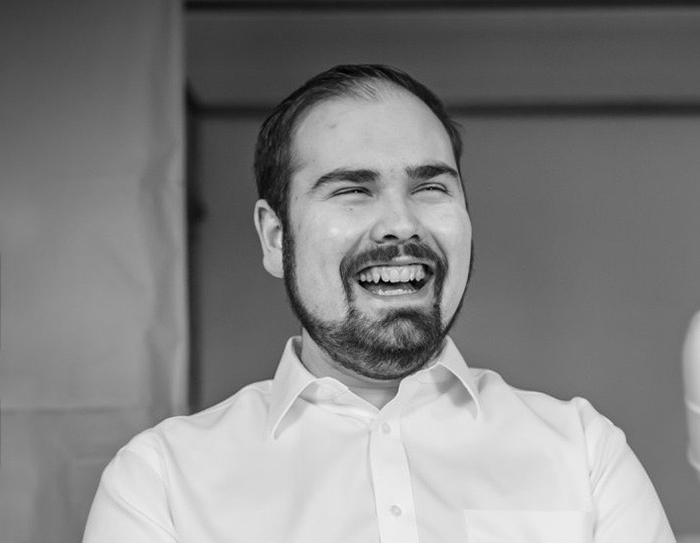 My senior year at Dickinson, I was fortunate to have the opportunity to play the role of Tevye in the Department of Theatre & Dance’s production of Fiddler on the Roof. It was a significant undertaking that held personal meaning for me, since several of my Jewish ancestors left Russia and Eastern Europe in the early 20th century, around the same time the story takes place. I got to work with an incredible group of actors (including Professor of Mathematics Barry Tesman, who played the rabbi), and it was gratifying to see Mathers Theatre sold out for four consecutive performances.

Tell us a little about your professional path.

I started out as an arts administration intern for a small theatre in southern Vermont. The executive director called me a few weeks before I was supposed to start working there and said, “We need help in development. Do you think you can do that?” I replied, “I don’t know what development is, but I’m a liberal-arts grad. I can do anything!”

That internship opened doors for me to work for another theatre on the east end of Long Island and then return to Dickinson as a regional development officer. I spent two and a half years working with Dickinson alumni in the Philadelphia area before moving to Philly and accepting a position as a major gifts officer at the Villanova University Charles Widger School of Law.

I feel Dickinson taught me how to think critically and problem-solve, which has helped me learn to do new things professionally. I’m enrolled in an MBA program at Villanova School of Business now, and despite being a theatre-arts and French double major at Dickinson, I am managing the course materials in this much different field and even excelling academically—I think that’s a credit to my Dickinson education.

What do you enjoy doing outside of work?

Theatre is still a great passion of mine, and my partner and I are season-ticket-holders at The Arden Theatre Company in Philadelphia. I still act in amateur theatre productions occasionally. My MBA classes take up much of my free time these days, but when I get time to relax, I enjoy biking, cooking, board and card games and fantasy football. I recently started playing Dungeons & Dragons via Zoom with a group of friends and family.

What inspired your gift to Dickinson?

When my family and I first visited Dickinson’s campus, we were absolutely smitten with the school, but we also saw the price tag, and we weren’t sure if we were going to be able to make it work financially. When the financial aid letter came in the mail, I learned that I was receiving the Kline Scholarship, which was established specifically for students from my hometown to attend Dickinson. Suddenly, a Dickinson education became possible for me. I try to give a little bit back to that scholarship every year in gratitude to the Klines for their generosity—without which I wouldn’t have been able to call myself a Dickinsonian.

Why do you think it’s important to give back to Dickinson?

Colleges and universities aren’t like other nonprofits; they can’t go out and just ask anyone for support. If we want a Dickinson education to be more accessible, if we want a more economically diverse student body, if we want better campus resources for first-generation and minoritized students, we can use philanthropy as an engine to drive those changes. Dickinson is ours, and it is our responsibility to make a Dickinson education even better for future generations.

Follow your passions. Learn how to talk about your liberal-arts education in job interviews. It doesn’t matter if you’re an anthropology major interviewing for a role at a tech startup. If you can find a way to make connections between what you’ve learned and your professional field of interest—no matter how disparate those areas may seem—smart managers will hire you.