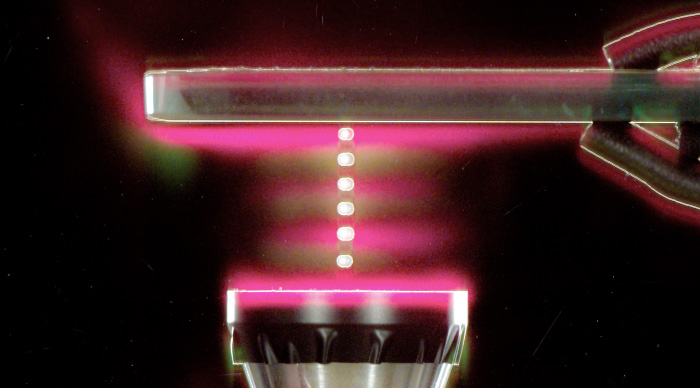 Image from acoustic levitation experiment by Ming-Hua Chang ’20 and Professor of Physics & Astronomy David Jackson. The colors, made visible by high-tech equipment, appeared just as you see them here.

Scientists have long known that small objects can be suspended in soundwaves, a phenomenon known as acoustic levitation. But while a mathematical understanding of this phenomenon was developed nearly a century ago, a simple description of what holds the objects in place has eluded us. Until now.

“We didn’t invent acoustic levitation, and we’re not the first ones to do this type of experiment. What we brought to the table was a much better understanding of it,” says Jackson, who co-published the paper last spring in the American Journal of Physics. “That’s pretty exciting.”

Jackson had been planning to conduct acoustic-levitation research for a couple of years—ever since he read another research group’s explanation of where objects should be suspended within the sound wave. Although that group’s argument was well-reasoned and made good sense, Jackson felt that the final prediction, which was at odds with a well-known mathematical prediction, might not be quite right.

“I knew this would make a great senior research project for a hard-working student,” Jackson says. Chang was a perfect fit.

The first step: Writing a proposal and ordering the materials Chang would need to construct the experiment. Chang slowly pieced everything together in a Tome Hall storage room. Then COVID-19 hit. An international student from Sri Lanka, Chang obtained permission to remain on campus—and also got the OK to continue his work in an empty room in his residence hall.

The student-faculty research team used an ultrasonic transducer to generate a 28 kHz sound wave, a frequency too high for the human ear to detect.  A glass pane reflected the wave back, fixing the soundwave’s nodes (places in the sound wave where pressure doesn’t change) and anti-nodes (places where the pressure changes the most) in specific locations in space. This created an acoustic standing wave.

Then small Styrofoam balls were suspended in the standing wave. The entire experiment was visualized, using a schlieren optical system, which imaged the sound wave in color and precisely determined the locations of the levitating objects.

Chang performed three sets of measurements and confirmed that objects are suspended at the sound wave's nodes (or, rather, slightly below them). In addition, the team's calculations show that there are two competing forces at play: an acoustic ponderomotive force and the much stronger acoustic radiation force.

Their paper, "Acoustic Levitation and the Acoustic Radiation Force” was featured on the cover of the American Journal of Physics [AJP] Vol. 89, No. 4. Spectacular images and a demonstration video are published on the journal’s website. The AJP article was also recently chosen for the “Backscatter” feature of Physics Today.

“Because of some recent technological advancements, acoustic levitation is kind of a hot topic right now,” Jackson says. “So our results have been generating a lot of interest.”

“I’m grateful to have been able to work with Professor Jackson on this project,” says Chang, now a Ph.D. student in physics at Penn State University.  “I feel a sense of accomplishment because we managed to measure the pressure of an acoustic standing wave with levitating objects, which, to our knowledge, had not been done before.”