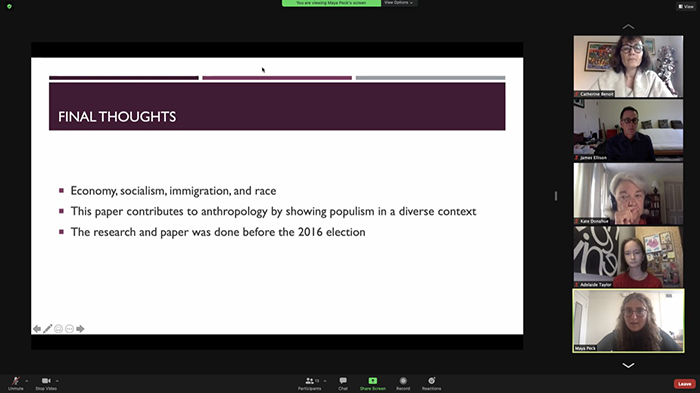 Maya Peck '22 (anthropology and political science) recently presented original research via a Zoom conference sponsored by the Northeastern Anthropological Association (NEAA), proudly representing Dickinson among a number of other higher-education institutions. Peck performed this research alongside Associate Professor of Anthropology James Ellison during his fall 2020 Ethnography course. He later encouraged Peck to present at the conference.

"In my research, I explored why some Latinx Americans voted for President Trump in the 2016 election and had continued to support him throughout his presidency using the lens of populism. I started out explaining what populism means in general and in this example," Peck explains. "Furthermore, I used the term right-wing populism to describe Trump’s presidency. I then looked at the different reasons why Latinx voters voted for Trump. These topics included why populism is attractive, how Democrats are framed, Trump being seen as an outsider, socialism, immigration and race. I interviewed two Latina women who voted for Trump as one type of source for my research."

Thanks to Dickinson's hands-on, personalized approach to the liberal arts, which includes research opportunities like this as well as her internship with the U.S. Army War College, Peck sees her double major as a great way to merge culture and politics. "I enjoy both of these majors because the focus is on learning about people from a structural and cultural lens," she says. "How people think and live in a political and cultural way is something I find endlessly fascinating."