Former U.S. Attorney General Eric Holder Urges 2021 Dickinson Graduates to ‘Get out There and Change the World’ 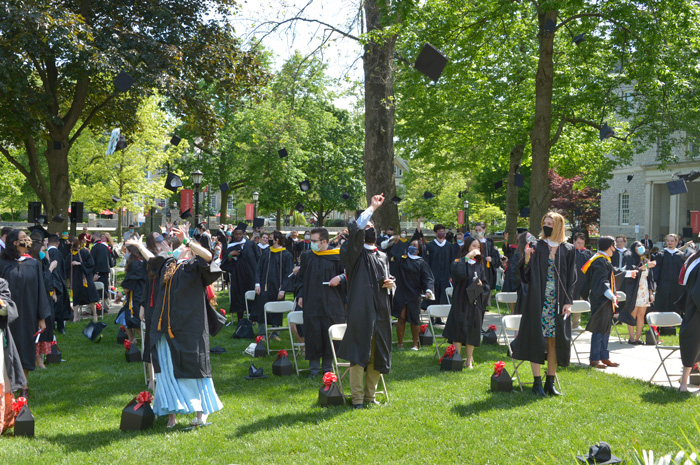 “The fact that you chose to enroll in one of the world's preeminent colleges, and that you're now graduating into this crucible, means that you're right where you belong and right where we need your energy, your ideas for leadership, the most,” said Holder, who addressed the class via a prerecorded video.

Due to the COVID-19 pandemic, which still prevents large gatherings, Dickinson held its 2021 Commencement virtually via Facebook Premiere. Graduates participated in the tradition of walking down the Old West steps during Graduate Recognition Ceremonies recorded last week. Video of the graduates walking as well as Holder’s address and the presentation of faculty and student awards were then broadcast on the college’s Facebook page during the virtual event.

Though the event may have been virtual, Holder urged the graduates to make a real impact. “I look forward to all that you will do and achieve from this moment on,” he said. “Our nation, our world is counting on you. I am counting on you. So congratulations, once again, God speed and best of luck, class of 2021. Now, get out there and change the world.”

During the ceremony, several faculty members and students were recognized with awards and honors, which are bestowed each year at Commencement.

Associate Professor of International Business and Management Helen Takacs earned the college's Constance and Rose Ganoe Memorial Award for Inspirational Teaching. Presented each year, the honor is determined by a secret-ballot vote conducted by members of the graduating class. Alex Bates, associate professor of Japanese language and literature, won the Distinguished Teaching Award.

The Hufstader Senior Prizes, which are awarded annually to two graduating seniors who, in the judgment of the college president, have made the greatest contributions to the good of the college, were awarded to Olivia Riordan ’21 and Phil Butler ’21.

Joanne Adebayo '21 was named the new Young Alumni Trustee. During each Commencement since 2011, Dickinson’s Board of Trustees has chosen a Young Alumni Trustee from among nominated seniors to represent young alumni on the board and serve a two-year term.

“This prize is going to allow Sunrise to recruit and train and organize thousands more young people to fight for a good job for every person who needs one, doing the critical work of a burgeoning climate catastrophe,” said Prakash, who will visit campus in the next academic year to meet with students and faculty during a brief residency.

In addition to presenting Holder with an Honorary Doctor of Justice Administration degree, Dickinson presented two other honorary degrees during the event.

David McCormick received an Honorary Doctor of International Affairs degree for his contributions to international affairs at the highest levels of government, and Esther T. Benjamin received an honorary degree in international education in recognition of the lives she has transformed through education and economic opportunity.

Both of the honorary degree recipients recorded messages for the graduates, which are available via the links above.

The event also featured a euphonium performance of “Rainbow Connection” by Kira Ousey ’21, during which the names of students who could not attend the Graduate Recognition Ceremonies were displayed. The formal ceremony ended with traditional singing of the alma mater and the ringing of the Denny Bell to officially close the academic year followed by messages of congratulations from alumni to the graduates.

The virtual Commencement, which was watched live by more than 350 viewers, was the final Commencement for Dickinson President Margee M. Ensign, who announced last week that she would be returning to lead the American University of Nigeria, effective July 1. Board of Trustees Chair John E. Jones III '77, P'11, who will serve a two-year term as interim president after Ensign leaves Dickinson, thanked Ensign for her four years of service as college president.

In remarks made during the Graduate Recognition Ceremonies, Ensign acknowledged the perseverance and adaptability the graduates have shown throughout the past year, which included a remote semester and a restricted on-campus semester due to the COVID-19 pandemic. “You have all faced down a pandemic with strength and courage and resilience,” she said. “Class of 2021, that means you can accomplish anything.”