Commencement: Behind the Scenes 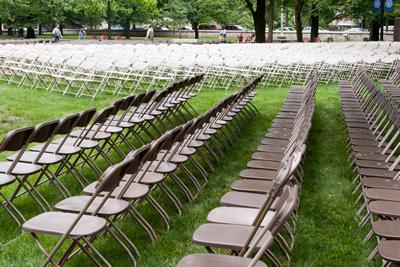 Many people come together to make every Commencement a success, including facilities-management staff, who set up 5,000 chairs, using strings and stakes to create perfectly straight rows.

Together, they conduct an orchestra of approximately 30 key players who set the stage for Commencement each year.

Planning begins in June with an evaluation of the previous Commencement. While Chief of Staff Karen Faryniak ’86 contacts honorees and other special guests, and Executive Assistant Jennifer Dobyns arranges travel and accommodations, Keebler sends mailings to expected graduates’ families and fashions the ceremony and program.

Warner pens the Commencement scenario, a script instructing all involved parties exactly what to do and when. She oversees logistical details—booking room reservations, handling special seating, ordering flowers, renting tents and so on.

Warner and Keebler stress that it takes a village to pull it off. Dining Services caters receptions and meals, Public Safety handles security and directs guests, and Conferences and Special Events sets up audio and determines sight lines. Facilities management oversees setup of 5,000 chairs, using strings and stakes to create perfectly straight rows with equidistant seats.

There are programs to design, print and hand out. Tents and banners are placed.  Students are lined up, robed and hooded.

“Timing is important,” says Warner, explaining that carpet is laid and vacuumed before the podium is placed, and the final list of graduates is approved before line-up signs can be created. “Everyone involved has to know what they are doing and how they fit into this very big puzzle.”

New traditions occasionally crop up, such as the ringing of the Liberty Bell replica, cast in the same foundry as the original bell, which symbolizes the college’s revolutionary heritage and continuing commitment to civic leadership. Unique ceremonial elements also are sometimes added, such as President William G. Durden ’71’s bestowal of cafeteria trays to 2010 graduates, a lighthearted nod to the college’s decision to “go trayless” at the start of that academic year.

There’s also the threat of inclement weather. Because graduates traditionally walk down the steps of Old West, the decision to move the ceremony indoors—made by the president’s office, facilities department, college marshal and senior class president—is difficult. Every year, chairs and a sound system are set up in the Kline Center, just in case.

Over the years, Warner’s “Commencement bible”—and the picture of clear-blue skies she optimistically affixes to its cover—has seen her through. Keebler adds that it’s all about perspective. “You have to concentrate on making every Commencement special for the graduates,” she says. “I try to be laid back about the things I don’t have control over. But it also helps to have a Dottie Warner and Jen Dobyns in my life.”