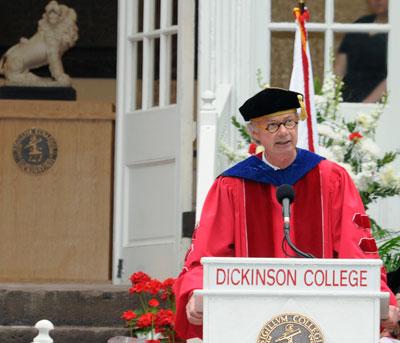 Ladies and Gentlemen, distinguished guests and members of the Class of 2010, welcome on such a beautiful morning to this grand old Dickinson tradition. Each year, we gather here before the stone steps of Old West to celebrate Dickinson’s most important responsibility and its greatest accomplishment—you, our graduates.

Today is a rite of passage for 543 members of the Class of 2010. Before proceeding, I would like us to continue an important Dickinson tradition. All graduates owe significant gratitude to your families and friends—those who have made it possible through their love, guidance and support for you to be here today. Please rise and join me in giving them a round of well-deserved applause.

At the end of this ceremony, you—the Class of 2010—will cease to be Dickinson students and become alumni of the college. This significant transition is straightforward, yet profound. There is first a simple, formal statement from me indicating that, upon recommendation of the faculty to the Board of Trustees, I confer upon you your degrees. This is followed by the peal of a very special bell marking the exact moment your transition to alumni occurs. And finally, you are asked to switch the tassel on your mortarboard to the other side to indicate symbolically that you are now a graduate and not an undergraduate student.

The bell that will be rung to mark this momentous occasion is a small replica of the Liberty Bell. It is one of a very limited edition that was cast in the same foundry as the original bell, and it is significant to Dickinson for a number of reasons. The Liberty Bell was originally commissioned by the Pennsylvania General Assembly. The speaker, Isaac Norris, was given oversight of its casting and he selected the bell’s inscription, which is to “proclaim liberty throughout the land.” Norris would become John Dickinson’s son-in-law, the individual for whom our college was named.

Equally important, this replica of the Liberty Bell symbolizes our revolutionary heritage and our commitment to education for democratic leadership. It reminds us that our founder, Dr. Benjamin Rush, and many of our earliest financial supporters—Thomas Jefferson, James Madison, John Dickinson—were signers of the Declaration of Independence and drafters of the U.S. Constitution. Our college was an essential part of their dream for a university education befitting a new nation. As such, the ringing of the bell serves as an inspiration to remember their voice on this important day in your lives.

The purpose for which Dr. Rush established our college bears repeating on this momentous day. Founded during the closing days of the American Revolution, Rush expected Dickinson to provide students with a useful, pragmatic education that would allow them to ensure the success of the new democracy. This was an activist and not a passive notion of education. It celebrated reflection and study in the service of commitment and accomplishment. From the very beginning, our college was intended to be a powerful agent of change to advance the lot of humankind.

Rush’s vision is every bit as relevant today as it was more than 225 years ago. Just as the earliest Dickinsonians confronted a chaotic and unknown future as the shape of a new nation emerged from the Revolution, our increasingly complex, global society faces unprecedented challenges and opportunities that will require creative, pragmatic and determined leadership. We—the faculty and staff of Dickinson College—have worked closely with you these past several years to prepare you to accept the historic responsibilities that come with being a Dickinsonian. It is now up to you to embrace and fulfill these expectations through leadership and service to your professions, your communities, your nation and the world.
In a few short moments, you will follow generations of Dickinsonians spanning four centuries who have preceded you down these stone steps. They include a president of the United States, a chief justice of the U.S. Supreme Court, associate justices, federal and Commonwealth judges, scholars, teachers, business leaders, entrepreneurs, research scientists, writers, artists, lawyers, journalists, humanitarians, philanthropists, military leaders, religious leaders, diplomats, elected officials and even a few college presidents. In the last month alone, numerous Dickinsonians have been highlighted nationally and internationally. For example, Chad Mirkin, Class of 1986 and a professor of chemistry and engineering  and director of the International Institute of Nanotechnology at Northwestern University, was elected to the National Academy of Sciences, and Captain Robert McDonough, Class of 2006 and graduate of Dickinson’s U.S. Army ROTC program, was awarded the German Gold Cross for the bravery (and that of his fellow U.S. soldiers) displayed during a dramatic rescue of ambushed German soldiers in Afghanistan in early April. Captain McDonough and his colleagues were the first foreigners in German history to be awarded that country’s highest honor for bravery.
As you make your mark beyond these limestone walls, remember the simple words Benjamin Rush once used to describe himself as a signer of the Declaration of Independence. Although he wrote eloquent and long paragraphs about his fellow founding fathers, of himself, he simply said, “He aimed well.”

Your life will inevitably take some twists and turns and you will undoubtedly make some mistakes along the way. Accept these for the learning value they provide. And as true Dickinsonians, never lose the same self-effacing but powerfully effective perspective that guided Dr. Rush. I ask that you, too, “aim well.”

When I graduated Dickinson in 1971 the world was in the throes of massive change and disruption—change that would ultimately alter how we live, how we interact with each other and what attitudes we had for decades to come. There was the sexual revolution, the struggle for civil rights and social justice and the extreme divide over the justness of the Viet Nam War. As Dickinson students we experienced this change directly in a variety of ways and it was traumatic. Social structures—to include residential life rules and adult supervision—changed overnight; males faced a military draft and had to decide very quickly about their fate—military service, Canada or CO (Conscientious Objector) status; and, many of our fellow African-American students challenged the prevailing culture and the college itself to embrace equality and diversity. They proudly asserted the power and beauty of their culture and race. Dickinsonians were pitted against Dickinsonians on all these issues. And all of us looked to the “Administration” for more profound guidance and institutional commitment to the various causes we championed. We wanted the “Administration” to make sense of all this abrupt change for us. Administrators were subject to extreme criticism and suspicion from all groups for not necessarily endorsing their particular perspective on the issues. Numerous students revolted and emulated the more militant path of students at Columbia and Berkeley. The President’s Office in Old West was briefly occupied by students—without violence, I must add. What was a seemingly docile and predictable world, depending on who you were, suddenly turned into a world of agitation and new directions without resolution.

As I mentioned in my baccalaureate address yesterday, your class in particular is living through the initial phase of equally profound change—but of a global economic and financial order. You are encountering a sudden shift in financial predictability and expectation. As students you experienced this directly at Dickinson in the form of cutbacks or alternatives to what you took for granted in your daily lifestyle. Gone were unlimited laundry, printing and cable, as well as trays taken from the cafeteria in order to go tray-less. Again, sudden change is emotionally profound no matter what order of magnitude or context. I appreciate the change you lived through these past 4 years.

Now, when I was a student we received no material artifact from the college to remind us, over decades to come, of our formative experience defined by societal change. That was unfortunate. All we have now is our increasingly imaginative—if not faulty—memory. But then I thought—well, now that I am president of the college, I can do something to change that for you. I clearly can’t give each and every one of you a washer/dryer or a Xerox machine—much less a cable TV fully loaded—but I can give you something else if you wish.

President Durden displays one of the old cafeteria trays that will be presented to graduating students. 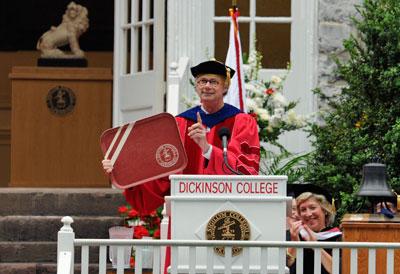 So besides the diploma, I offer you the infamous and decades-old Dickinson College CAF tray—a true collector’s item. Your possession of it will soon become the envy of all other alumni. The tray is decorated with Dickinson symbols and has been “in service” for decades—this is not a replica. Additionally, not only will you possess for a lifetime material witness of the broader changes that this tray merely symbolizes, but you will never be tray-less again! You are invited to bring it back for alumni weekends, use it at grad and professional schools as they go tray-less, your place of employment and in your home. Use it even as some have here for decades as a great substitute sled in winter. In fact, by recycling this tray, we yet again assert leadership in sustainability!

Class of 2010, go forth and engage the world. It lies directly before you. In fact, you already carry it within you. It is of your making.

I congratulate you on the remarkable achievement you celebrate today. At the close of this ceremony, you will join a group of talented and ambitious alumni whose achievements and connections encompass the globe. As a fellow graduate of our college, I welcome you personally to this extraordinary group of individuals—this tight-knit and mutually-supportive community of accomplishment and service (and good humor!). We all have earned the privilege to call ourselves Dickinsonians. We have all earned the privilege to ensure this college as an affordable, accessible and highly reputable institution in the grand experiment that is democracy. Very few people can say that they have helped complete the dream of a signer of the Declaration of Independence. But now you can and we are all the better for it.