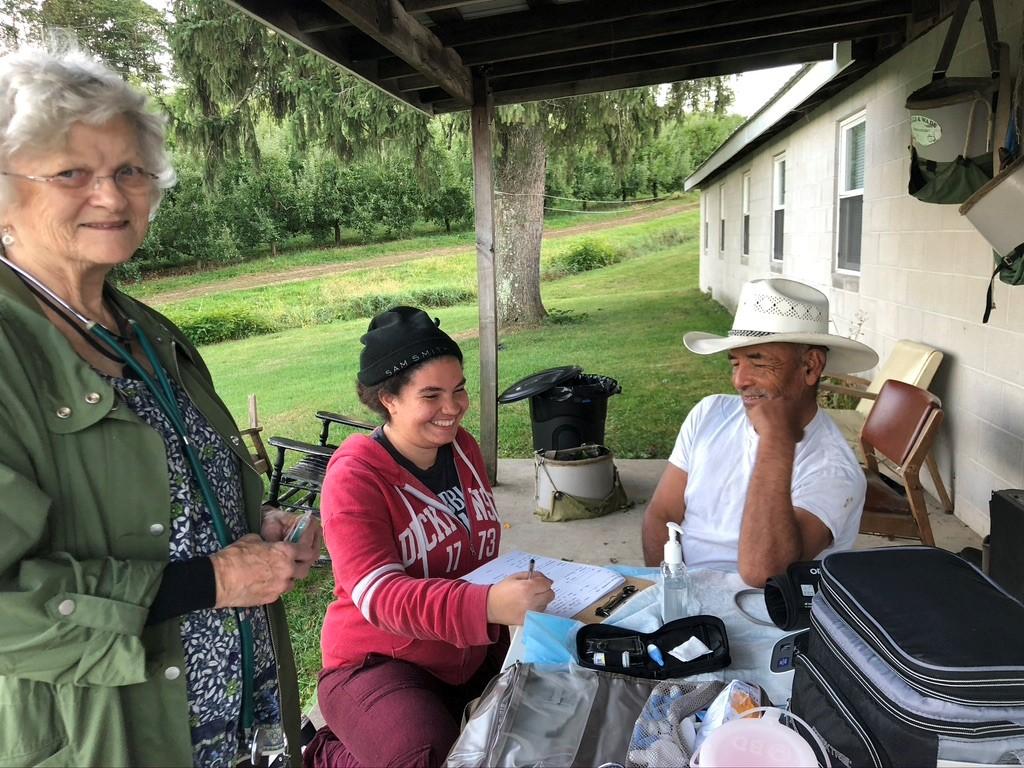 The title for Lecturer in Spanish Asuncion Arnedo-Aldrich’s fieldwork-based languages class isn’t flashy or enticing, but year after year, it ranks among Dickinson students’ most popular and impactful courses. Spanish in the Health Professions takes students to clinics and migrant camps to serve as translators for workers in Cumberland County, Pennsylvania, and the healthcare providers who serve them. As they shore up their Spanish-language skills and learn firsthand about social and cultural factors that create barriers to effective healthcare, students also gain high-level, cross-cultural professional skills.

The course was developed in 2005 through a partnership between Dickinson’s then Professor of Spanish Wendell Smith and Keystone Health and has since been expanded by Arnedo-Aldrich. After learning related medical terminology, some students visit migrant camps in Franklin, Adams, and Cumberland counties to help migrants preregister workers for services at a local health clinic. Others visit a clinic and provide interpreter services for doctors and nurses as they meet with Spanish-speaking migrant patients and deliver health care services and assessments. When Dickinson went virtual for the fall of 2020, Arnedo-Aldrich continued to work with Keystone as an outreach coordinator/interpreter. She provided phones to the migrant workers so students and workers could interact.

This work requires students to not just expand their Spanish-language vocabularies but also to quickly establish trust and clear lines of cross-cultural communication—a valuable skill in any profession, and a critical one for medical professionals.

Prior to visiting a migrant neighborhood, students helped assemble “healthy packages” to distribute to the workers. This helps break the ice while also making an immediate positive impact on their well-being. (During the remote semester, Arnedo-Aldrich, Dickinson staff and Keystone members put the packages together and distributed them.)

Arnedo-Aldrich originally secured funding for these supplies through a grant from Carlisle’s Partnership for Better Health, and during the past two years, she’s received funding through Dickinson’s Andrew W. Mellon Foundation grant, in partnership with Keystone Rural Health Center. The Agricultural Workers Program Health Packages initiative is one of 12 recently funded projects supported by Dickinson’s Center for Civic Learning & Action this year through the Civic Engagement Fund.

The course attracts students interested in health care, languages, global cultures, social justice, social science, food studies and sustainability, among other disciplines. As they learn about the Spanish language, sustainable food systems and health care delivery, they also learn firsthand about the lives of migrant workers, the issues they face and the vast differences in living and working conditions group to group and camp to camp.

“I think this is one of the best classes at Dickinson,” says Kristin Kozar ’20. “It really brings a wide array of perspectives and people to the table.”

For Dickinsonians planning a career in health care, like Ryan Murphy ’20, now a first-year med student at Penn State College of Medicine, the course provides a window to issues affecting health care delivery and effectiveness that many longtime practitioners may not fully appreciate. While translating for doctors and nurses during appointments and screenings, he deepened his understanding of patient care, and of patient care across cultures. He also gained new perspectives on social and cultural issues affecting the health and well-being of parts of the patient population, and he expects that this will inform his own practice in the years to come.

“The class opened my eyes to the politics behind not only our health care system, but also our food system, and how closely linked immigration is to both health care and the food system,” Murphy explains.