Cogan Fellowship 2021: 'Covering Race in the Age of Trump—and After' 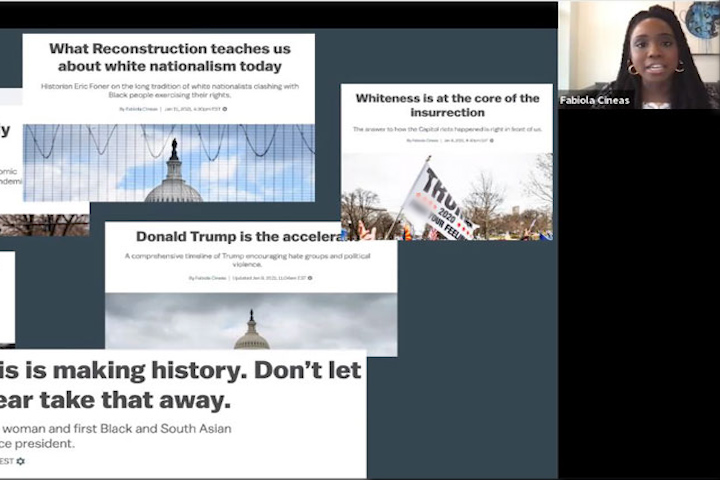 From former President Donald Trump to the Capitol riots to Vice President Kamala Harris, Fabiola Cineas' headlines serve as a perfect map to her writing career.

For some English majors, becoming a professional writer is the dream. For Fabiola Cineas '12—a staff writer for Vox and a host of Vox Media Studios Emmy-nominated YouTube series Glad You Asked—that dream wasn’t waiting at the end of a straight path. And she finds that being a “race reporter” for a national outlet—while fulfilling personally and professionally—can be as complicated as race in America itself.

Dickinson’s Cogan Alumni Fellowship brings back former English majors annually to discuss their career paths. To discuss hers as well as her Dickinson experience, Cineas recently gave a virtual talk with current English majors, as the 2021 Cogan Fellow.

“If I could describe my time as an English major at Dickinson, it would be hard—it was challenging,” said the former Posse scholar, who was also busy with being a Liberty Cap (admissions tour guide), MOB chair and member of a sorority. “What the major helped me realize was to stick with and tackle writing.”

After graduating, Cineas brought what she had learned at Dickinson into another classroom, as a writing teacher with Teach for America in Camden, New Jersey. There, she embraced her students in ways that brought their identities and shared histories into the classroom in meaningful ways.

“I tried to be as revolutionary as I could,” Cineas said, noting that she became an active participant in revamping her school’s curriculum. “I had read slave narratives myself in high school, and so to be able to bring that to seventh graders in my classroom was amazing. Teaching Frederick Douglass, teaching narratives of the life of a slave girl, was really, really powerful.”

After leaving the classroom behind after three years, Cineas “decided to take a leap,” becoming a freelance education writer. That led to a job as business editor at Philadelphia magazine, where she covered such notable events as the 2020 Democratic National Convention, the Philadelphia Eagles’ 2018 Super Bowl victory and the death of civil rights activist and longtime U.S. Congressman John Lewis. Along the way, Cineas earned a master’s degree from the University of Pennsylvania.

The Era of Trump

But what indirectly led to her talk, and provided its eye-grabbing name, are her experiences as a race reporter for Vox during the presidency of Donald Trump.

“Becoming a race reporter last year, at a time when all people want to talk about is race, was just so intense,” she said. “I think that's a lot of what keeps me going and keeps me motivated: that a lot of what I'm writing is not going to be so intense or seem so new. This topic is not new; these are things that have been happening for centuries. But I think with this kind of voice and what we're trying to do now in 2021, things do feel a bit uncharted.”

Cineas’ reporting on race in America tackles real issues in real ways, and her writing in one case caught the eye of Candace Owens, a young Black activist known nationally for her conservative views and efforts to draw Black voters away from the Democratic Party. Owens sent Cineas an email in response to her Vox article “Inside Candace Owens’ Misinformation Campaign,” expressing her displeasure with Cineas’ take (and later blocking Cineas on Twitter).

While that particular email was notable, Cineas said criticism like this is part of daily life for any reporter. And with feelings, opinions and voices intensifying since the 2016 presidential election, Cineas knows that she entered the field at a uniquely stressful—and perhaps fertile—time. But she also knows that her stories need to be told.

“It’s part of the job,” she said. “But it means that we need to keep going, that there’s a job to be done.”

The Cogan Alumni Fellowship program is named in honor of Eleanor Cogan, honoring her extraordinary commitment to lifelong learning and to the study of English literature.