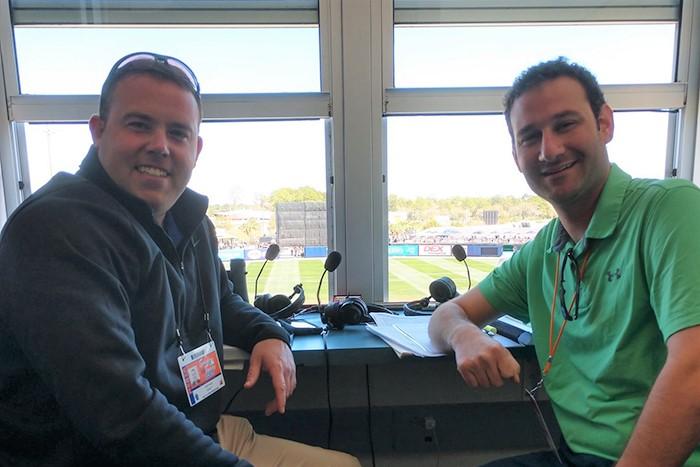 Imagine two students back in the aughts calling Red Devils athletics events together—from volleyball and lacrosse to football, basketball and baseball. Then imagine them graduating and finding careers in the broadcast industry and then, somehow—likely against all sensible chances—landing jobs in the same broadcast booth at the Major League Baseball level. That’s exactly what happened to Geoff Arnold ’10 and Brett Hollander ’07, now the radio broadcasters for the Baltimore Orioles.

“The odds of this happening for one of us to get to this level are slim,” says Hollander, who, alongside Arnold, wrapped up his first season in the Orioles’ booth in the fall, appearing on both MASN and the Orioles Radio Network. “For both of us to get there [the odds] are extraordinarily slim, and for both of us to get here at the same time, for the same team, interacting on the same broadcast—I mean, there’s just no way to calculate how small of odds and percentages we’re talking about.”

Before joining the Orioles broadcast, Hollander hosted The Brett Hollander Show on WBAL Radio and was named Maryland Sportscaster of the Year in 2015. Arnold had spent eight seasons calling minor league baseball and broadcasting college football, basketball, baseball and Olympic sports on an array of platforms.

For Hollander, the path was always clear. “I’ve known since I was 8 years old what I wanted to do,” he says of broadcasting, “and I have audio cassette tapes and Dictaphone tapes in my house of me, broadcasting games with the TV sound down in my parents’ bedroom.” But for Arnold, the path to MLB wasn’t as obvious, and he wandered onto it at Dickinson during his first year on campus.

“I decided to go to check out WDCV [Dickinson’s radio station], and they let me  on the air for the first time during halftime of a Dickinson football game,” he says, noting that he wasn’t quite a natural. “Brett was like the WDCV sports broadcasting superstar, and I just listened to him. And so my goal [was] to  be somewhere around as good as him by the time I was a senior. And it sort of became a lifelong passion.”

Anyone involved with sports on any level wouldn’t have wanted that passion to finally pay off in the form of a career in 2020. But in the realm of MLB, the pandemic-induced situation was about as bad as it gets, as the season was cut short from the usual 162 games to just 60. Yet for Arnold and Hollander, 2020 was one for the books, mixed emotions and all.

“It’s one of those things that you want to remember forever, but also forget completely,” says Hollander. “There’s no other way to describe it.”

When the 2021 season gets underway in the spring, the pair will be side by side again, hopefully propelled by fans once again filling baseball stadiums. But they know that whatever else comes along, they’re living the dream, doing what they love.

“It’s extraordinarily hard, but in the end, we’re working in the toy department of life  and talking about something that’s just naturally really fun, interesting and entertaining,” says Hollander, a lifelong Baltimore resident. “I told myself that if I ever got a chance to get paid to watch Orioles baseball, then I really would’ve made it in my life. And I have found a way to do that.”

Listen to Hollander and Arnold share tales of their journey from calling Red Devils games on WDCV to the big leagues in the October 2020 episode of Dickinson’s The Good podcast.

Read more from the winter 2021 issue of Dickinson Magazine.