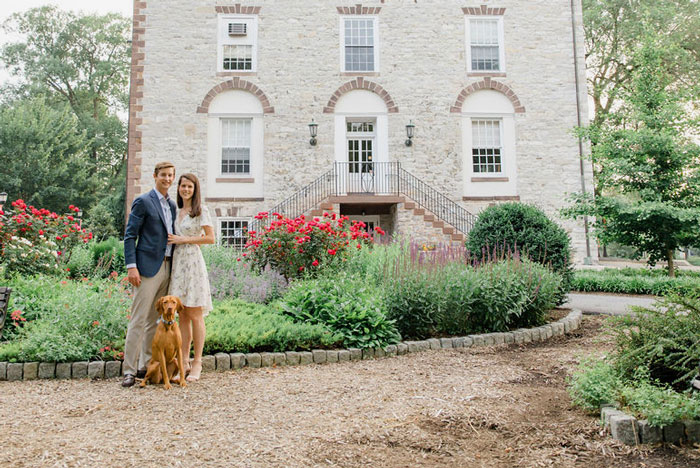 Alumni couple look back at their time as Red Devil athletes

Alumni couple Catherine Campbell Worthington ’12 and Arthur Worthington ’13 both excelled in their respective sports, with Catherine a standout runner for the Red Devils and Arthur one of the top men's golfers in program history.

Catherine grew up in Carlisle and played just about every sport imaginable, while Arthur, who grew up near Baltimore, has been playing golf since a young age.

"I was pretty bad at just about everything else related to ball sports,” Catherine says. “In fifth grade I joined the track team, and it was all history from there." For Arthur, it came down to simple geography.

"I was fortunate: I grew up right near a golf course," he says. "Evenings in the summer were spent with family playing. When I was young, both brothers and I would leave the house at 8:30 in the morning and come home at 6:30 at night, and the whole day was spent playing and practicing golf."

The couple met on campus through mutual friends during the summer of 2011, when Arthur was in Carlisle to sing with the Octals and Catherine was on campus early for cross country preseason. And it’s life on campus that they both look back to fondly.

"Because it is smaller, you get to know a lot of different people," Arthur says. "I’m a big believer that you join different groups and organizations when you go to college. At least in our experiences, we fell into leadership roles and leadership opportunities, and those helped set us up for success in our careers."

"I had an incredibly special time as a runner," says Catherine, a former biochemistry & molecular biology major and now a doctor in a Baltimore-area orthodontics practice. "Coach Nichter created such a wonderful and successful team at Dickinson. I really enjoyed the team aspect, and Coach Nichter was really all about the team and the team's success. Being part of the greater team helped bring out the best in myself."

Arthur recalls that Coach Darwin Breaux understood that all the golfers came from a different background and had their own swing coach. "He let us evolve as golfers and lean on our coaches back home," says the former economics major and relationship manager with SEI Investments. "He was a great leader and great organizer in giving us an environment to succeed."

Catherine had an outstanding career in both cross country and track and field. In 2012, she ran to All-American honors in the 5,000-meters at the NCAA Indoor National Track & Field Championships and was named to the Co-SIDA/Capital One Academic All-American Team for cross country and track and field. She was a four-time NCAA All-Region and three-time First-team All-Centennial Conference performer in cross country, leading the Red Devils to four straight NCAA Championship appearances. She captured a conference title in the 3,000-meters at the indoor championships in 2012 and earned a combined six All-Conference honors in indoor and outdoor track and field. She is also a two-time McAndrews Award Winner, earning the honor as the top performing female student-athlete in both 2010 and 2012.

As for Arthur, he helped lead Red Devil golf team to a pair of third-place finishes and a fourth-place showing at the Centennial Conference Championships. In 2011, the Red Devils set a then-conference tournament record with a low-round of 301. He turned in the low-individual round of the season that spring and had a season average of 80.2. In 2012, he led the team, dropping his average to 77.5 and had five top-10 finishes in seven tournaments. He had a career-best showing at the Centennial Conference tournament, claiming eighth in the individual standings. He added three top-10 showings in 2013, averaging 79.5 on the year and 79.8 for his career.