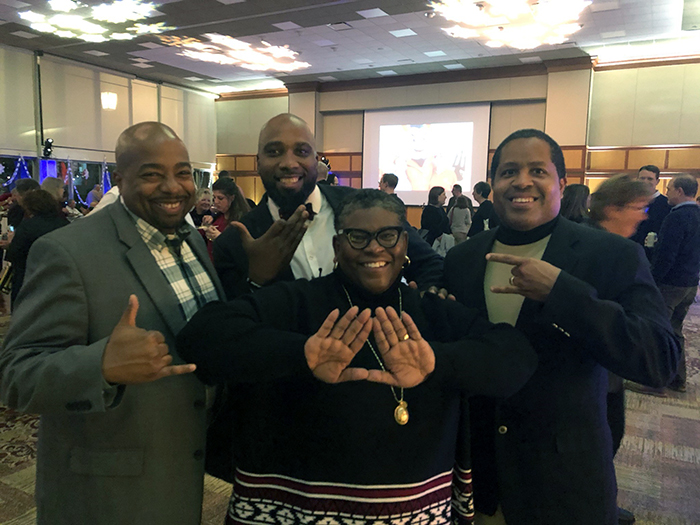 The inauguration of the first woman, first Black American and first South Asian American vice president of the United States was a monumental moment in American history. And for members of historically Black fraternities and sororities, it carried an additional measure of meaning and pride. That includes the Dickinson chapters of Kappa Alpha Psi and Delta Sigma Theta and three professionals on Dickinson’s senior leadership team, who were elated to see one of their own step into history on Jan. 20.

So watching Harris swear in as vice president, they were doubly moved.

“This was a special moment for our country. The fact that the highest-ranking woman in this country is both Black and a Black Greek is icing on the cake,” says Isaac, who joined Divine Nine fraternity Phi Beta Sigma while enrolled at The Ohio State University. “There is a certain spirited camaraderie between the nine Black Greek letter organizations, and we all recognize that membership in the Divine Nine brings with it a level of pride, hard work, toughness and ability to rise above turmoil and strive to accomplish challenging goals.”

Harris signaled that kinship during the 2020 Democratic National Convention when she donned pearls—a symbol of her Alpha Kappa Alpha sorority—and referred to fellow Divine Nine members as “family.” She offered a visual shout-out on Jan. 20, when she stepped into history with pearls again on proud display.

Her gesture points to a lifetime commitment of engagement and service among Divine Nine members. And it resonated soundly with Burleigh-Jones, a third-generation Delta Sigma Theta member (American University). In the days leading up to the 2020 election, Burleigh-Jones ensured that all Dickinson Deltas had “Delta Voting” T-shirts they could wear to the polls on Election Day. And, like her fellow D9 women around the world, she celebrated Inauguration Day 2021 in pearls.

"Counting down the hours until I can celebrate the accomplishments of two women who look like me. One will be named as our country’s first woman of color to hold the office of vice president of the United States. The second is poised to be recognized as the strategist who helped make the Biden-Harris victory possible," Burleigh-Jones wrote in an Inauguration Day Facebook post. "The visibility of ‘Black girl magic’ has me dancing all around the house. Today is a day that will provide an irrefutable and shining example of our tenacity, excellence and refusal to be stopped!”

For Isaac and Stroud, the rippling effects of the day are also already deeply felt.

“At a time when many people of color are disheartened with the tone and tenor of the political rhetoric and racial tensions, Vice President Harris’ rise to the vice presidency offers a beacon of hope,” Isaac says.

“Her swearing-in was an emotional moment,” says Stroud, a member of the Xi Mu chapter of Alpha Phi Alpha (Slippery Rock University), who watched inauguration coverage with his wife, an Alpha Kappa Alpha sorority sister. “I feel a great sense of pride knowing that VP Harris will forever be remembered for this historic first, and I am confident VP Harris will serve as inspiration to my daughter and other young women that anything is possible.”