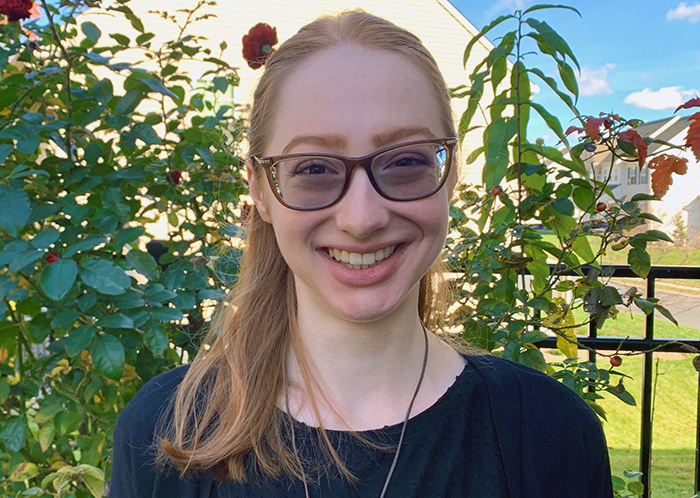 For her research on how music education and music archivists can confront racism and insensitivity and work toward inclusive representations of Indigenous cultures, Elizabeth Pineo ’21 (music, educational studies) interviewed professionals with Smithsonian Folkways Recordings and the Smithsonian’s Center for Folklife and Cultural Heritage. Below, she discusses that research, the sense of community she’s found in the music department, her experiences with professors and the day she decided to attend Dickinson—much to her own surprise.

Music, with a minor in educational studies.

The academics. I love to learn, and Dickinson is the place to do it. It sounds so cliché, but the professors are incredible, caring individuals whose doors are always open. I’ve been pushed and supported by my Dickinson professors in equal measure, and I wouldn’t trade the careful, mindful instruction I’ve received here for the world.

The community. The music department has an incredibly strong sense of connection and unity. Unlike some other music departments, there isn’t any sense of competition; instead, our department is one of support and caring. We’re all there because we love music, and we want to make and explore music together. Having this sense of community behind me makes it easier to take risks and take on challenges. As a result, I’ve grown more as a student and musician over the past few years than I ever could have imagined I would, and I’m immensely grateful for every second I’ve spent with every single member of the music department.

… a marine biologist. I thought all they did was swim with sharks! I didn’t realize there was science involved too …

I decided to attend Dickinson a block after my sister.

Allow me to explain. My parents, Tom '92 and Tania Pineo ’92, both attended Dickinson, and I was convinced that I would never attend my parents’ school. In fact, I had my heart set on attending a different school. Thinking I was settled, my parents decided to add a stop at Dickinson to my college search so that my sister, Emily Pineo ’23, could see the school for her own college decisions. Just after our tour group crossed onto the block adjoining the academic quad, my sister, unbeknownst to me, whispered to my mom that this was the school for her. To this day, I don’t know what it was exactly about Dickinson that grabbed me, but something about the campus just felt right. At the end of that same block, I told my mom the same thing Emily had. Later that year, I applied Early Decision—and the rest, as they say, is history.

My favorite class is, without a doubt, my piano lessons with Professor of Music Jennifer Blyth. I’ve taken weekly lessons with Professor Blyth since my first semester at Dickinson, and I’ve learned more than I ever could have imagined under her kind, patient guidance. I’ve grown not just as a pianist and performer, but as a learner and person too. In my lessons, I learned to confront challenges head-on and to work at them until I find a solution, and that’s a skill—a mindset—I’ll carry with me and benefit from for the rest of my life.

If I could have dinner with anyone, living or dead, it would be…

… Living, either author John Green or vocalist Sierra Boggess. They’ve both influenced how I live my day-to-day life for the better, and I’d love to pick their brains about just about anything. Dead, I’d love to talk to Clara Schumann. She’s a phenomenal pianist, a pioneer for women in music—and, generally, an amazing person.

For the past three summers (and a few weekends in between), I’ve interned with the Harrisburg Symphony Orchestra. This past summer, I worked on developing a video for elementary students on how orchestration works in the main theme of Modest Mussorgsky’s Pictures at an Exhibition. During that project, I gained valuable skills in media/video/audio production that I ended up drawing on heavily throughout this semester. Last summer, I filled in for the box office manager, which gave me great hands-on experience with the day-to-day runnings of a performance organization. I’ve been incredibly grateful for my experiences with the Harrisburg Symphony Orchestra, and I've found the experience of being involved with an organization in the long term to be incredibly valuable—especially because most internships last only a few months. I've had the opportunity to watch the Harrisburg Symphony Orchestra grow and change, and I've gotten to develop deep connections with the staff in a way that wouldn't be possible otherwise.

I grow succulents and air plants! I have a lot of plants that came from a bargain shelf, which is where garden shops tend to put the plants that don’t look right. Because they’re on the bottom shelf, those plants also tend to be deprived of light and water, which only makes the problem worse. But those are my favorite plants! Watching them prove to the world that, even though they were written off for purely superficial reasons, they can still thrive, bloom and generally be gorgeous is one of the most inspirational experiences in the world.

This past fall semester I completed my senior music thesis, “The Role of Education and Sensitive Representation in Decolonizing Music Archives.” Music archives’ representation of Indigenous individuals have, historically, been plainly and unsustainably racist. Though this issue isn’t exclusive to music archives or Indigenous individuals/groups, these are the facets of the issue I focused on.

I argued that archives can employ music education initiatives to confront the harmful, oppressive realities perpetuated by insensitive representations and begin to move toward more inclusive, sensitive representations. While education initiatives do not amount to full decolonization (the process of returning land and/or physical objects taken by settlers, usually during a period of colonization, to their Indigenous owners), they can be useful in creating spaces in which the process of decolonization can begin.

Throughout the duration of this project, I had the opportunity to conduct interviews with individuals at Smithsonian Folkways Recordings and the Smithsonian’s Center for Folklife and Cultural Heritage. I also got to bring together my music major, my educational studies minor, and my love of Spanish—all while learning more about issues that are vitally important to me.

This thesis project was a transformative experience, and I am a changed student and person as a result of it. None of my work or experiences would have been possible without Professor of Music Amy Wlodarski, who guided this year’s senior colloquium with a perpetually steady and supportive hand. Thank you!

After Dickinson, I plan to attend graduate school for library and information science.