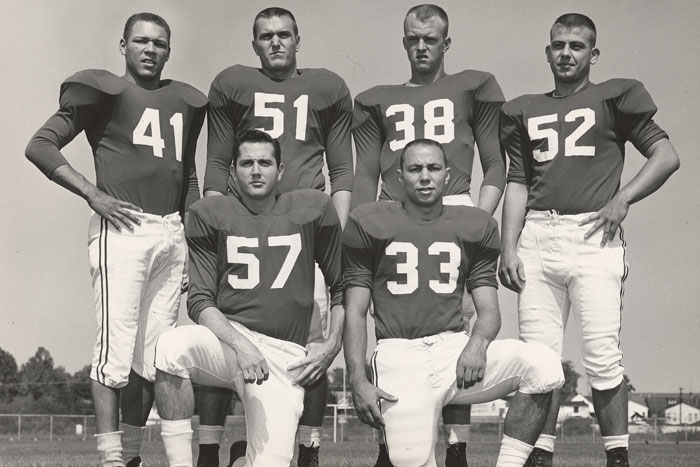 Robert Worthington (No. 41) and some teammates from the 1959 Red Devils football team.

Robert "Bob" Worthington ’60 grew up three hours west of Carlisle, in the Upper Hill district of Pittsburgh, and made a name for himself on and off the football field at Schenley High School. There, he was the first African American voted as the Student Council President.

On the football field, Worthington excelled as a tight end. He had the privilege of playing with Dan Marino, Sr., the father of Hall of Fame quarterback Dan Marino. His efforts landed him on the All-City Team as a senior, which Worthington says was "a great accomplishment and one of the proudest moments in my life."

During Worthington's senior year, he was put in touch with Dickinson’s director of admissions, Dr. Benjamin James ’34. After a phone call from James, Worthington told his parents he was going to apply on "a gut feeling." One month later, he would receive an acceptance letter in the mail and in the fall go on to Dickinson as an economics major.

"As a freshman I wasn't able to play varsity football, so I had to take a year to learn the ropes and understand the offense," Worthington says. It wasn’t long before he was on the squad, was named Homecoming game MVP, became the first Black football captain in Red Devils football history and received All-Conference honors.

"I had a good experience as a student-athlete and was blessed with great teammates that helped me stay despite the limitations I faced socially,” he says. “We were all there for each other and dedicated to being the best possible players and team we could be, both on and off the field.”

Worthington then went on to the University of Iowa, where he graduated with a masters' degree in urban studies in 1964 (the same year he married). After a long career in city planning in Minnesota, Worthington retired, since keeping busy with his nonprofit work. As a member of the American Planning Association (APA), and for his three-plus decades of working as a planner for multiple cities, in 2010 Worthington was presented with the APA’s Lifetime Achievement Award.

"It's a rare honor to receive this award," Worthington says. "When you are selected by your peers and they single you out as someone special enough to be recognized, it is truly special."

Worthington has also spent time as a member of Dickinson’s Board of Trustees and was appointed chairman of the Housing Finance Agency for 15 years by three different governors in Minnesota.

"Dickinson was the first step in me becoming my own person, and that is why I am Dickinson proud," Worthington says. "I am where I am because of Dickinson. I was raised to be a trailblazer, and Dickinson helped me accomplish my goals.”

Throughout the month, Dickinson is highlighting Red Devils past and present through All Devils Rise. Learn more at www.dickinson.edu/alldevils.