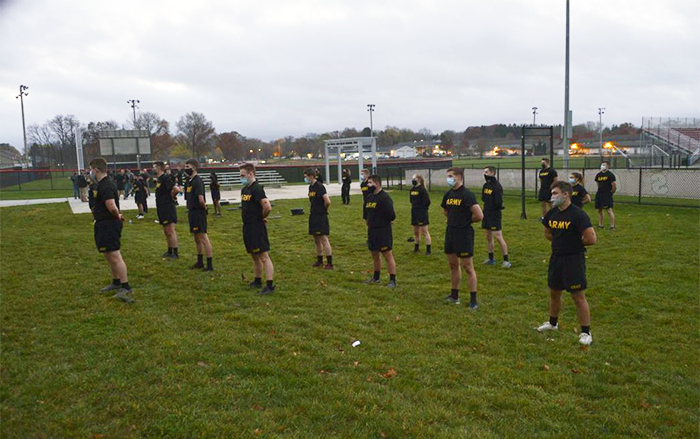 The brief outdoor ceremony was held in Dickinson Park. In light of COVID-19 concerns, the traditional Veteran’s Day 5K for Dickinsonians and community members was replaced by a socially distant workout for the cadets.

The donation was made in honor of the late Cpl. Matthew “Scrapper” Hanes, a York, Pennsylvania, native who became paralyzed from the chest down in 2012 after being seriously wounded in Afghanistan. Hanes returned to his hometown soon after, and his story of perseverance in the face of this adversity inspired local veterans and civilians alike. He died of natural causes in 2015.

“We are so appreciative of the support from the Warrior Brotherhood to our future Army leaders here at Dickinson,” said Krupski. “This donation will have a lasting impact on hard-working, non-scholarship cadets, and will allow them to honor Scrapper’s legacy.”

The Nov. 11 ceremony was the third special event organized by Dickinson’s ROTC this fall. On Sept. 11, Dickinsonians gathered for an on-campus Patriot Day remembrance. Last month, Blue Mountain Battalion marched into downtown Carlisle to hand-deliver the more than $3,000 worth of PPE cadets had collected for the nonprofit Community CARES.