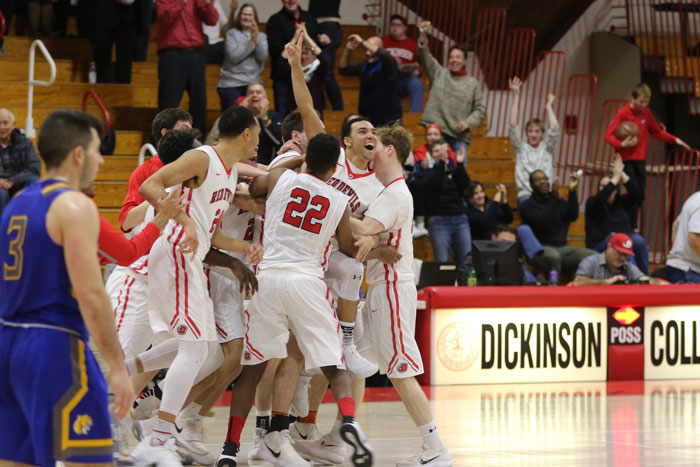 Dickinson basketball has a storied legacy, filled with big wins. Here, a postgame celebration ensues after a Bryce Allen '20 buzzer-beater against Misericordia University led the Red Devils to a 60-59 victory on Dec. 30, 2017.

Nothing brings people together like sports. And to strengthen ties between Dickinson basketball players, coaches, alumni, family and friends, the college and a group of dedicated alums recently launched Friends of Red Devil Basketball. When the call to join went out to the community, the idea was a hit right out of the gate.

“The response has been astounding!” says Mark Copeland ’91, one of the alums spearheading the effort, noting that the initial list comprised 50 men’s basketball players across a 20-year span. “[Now we have] an active group of alums in both men's and women's programs numbering over 400 and spanning seven decades. We tripled the attendance at Alumni Hoops Weekend in February, with more than 40 men and 25 women, and we only see the number growing in the future.”

The group’s goal is to strengthen connections through activities, networking, career development and mentoring, while supporting the coaches, teams, the athletics department and the college with recruiting and fundraising assistance. So far, in the midst of the pandemic, the group has had Zoom meetings, a virtual happy hour and meetings with coaches and current players as well as their parents. And a November 10 career panel of alumni featured alums presenting their stories and advice to current players.

“I was excited to be asked to be on this board and to help the women create a stronger alumni network,” says Roe Falcone ’95 , whose efforts are focused on career development, internships and mentoring and who met with members of the women’s basketball team last year. “It was great to share with them my experience at Dickinson while also discussing how important networking and connecting with alumni can be for their future. I think seeing the value in this really made me want to be on this board and have the ability to positively impact the student-athletes.”

Going forward, Friends of Red Devil Basketball will host alumni functions at games, Homecoming, Alumni Weekend and other events. The group also is initiating a mentorship and networking program that will engage basketball players during their first year and act as a launchpad for internships and full-time jobs after graduation. A conversation between Head Coach Alan Seretti and Mike McCauley '92, the group's president, about providing career advice to players has already led to a business analyst internship program, where McCauley has employed nine student-athletes (including four basketball players) over the last three years, with one athlete accepting a full-time position upon graduation.

As Copeland explains, men's alumni players had a close but informal allegiance over the years with the men's basketball program, encouraged by Seretti’s emphasis on team-alumni relationships. But there was never an actual organization. However, a previous alumni outreach project proved to be inspirational.

“When we saw how enthusiastically alums responded to the request to fund building new locker rooms for men's and women's basketball and volleyball, we realized how many people still had a lot of enthusiasm about their athletic experience, the college and their former teammates,” Copeland says on the group’s founding. He notes that the football team and their alumni have been instrumental in the development of Friends of Red Devil Basketball, with Scott Cohen ’91 and his leadership team helping accelerate the group’s development. “I can't thank them enough!” Copeland says. “We hope to return the favor to them someday.”

As for other teams starting their own “Friends of” organizations, Copeland says he thinks it’ll happen, and it’ll be one big group effort: “We’ll be working in concert with them as we all grow.”

Dickinsonians who want more information or to get involved with the group can email Mark Copeland.