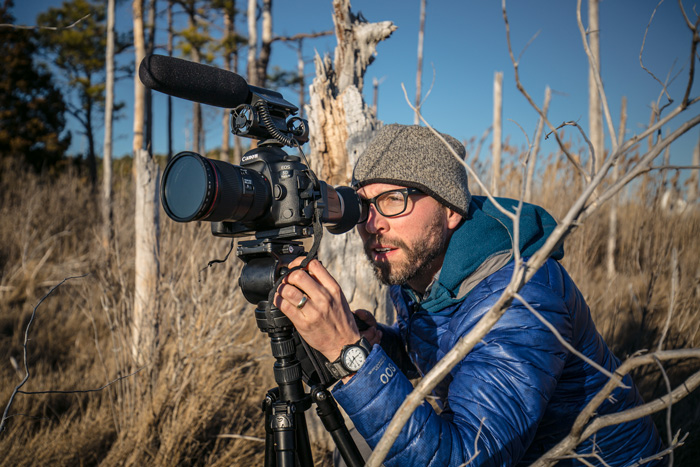 Michael Snyder ’03 is an award-winning photographer and documentary filmmaker who’s lived and traveled all over the world illuminating the impacts of and solutions to climate change. He is a fellow in climate journalism at the Bertha Foundation and a Blue Earth Alliance Photographer, and he was recently honored with the Portrait of Humanity Award—one of the world’s top honors in photography—for his work on climate change in the Arctic. Snyder’s work has been featured in National Geographic, The Guardian and the Washington Post. He is currently working on a documentary film project about climate migration in the U.S. He has been invited to present this work at the 2021 U.N. Global Climate Conference in Glasgow, Scotland.

At Dickinson, I learned to take an interdisciplinary focus, to explore the connective tissue that exists between disciplines. It happens to be true in ecology as well as academia that the really interesting stuff happens at the margins, the overlaps between systems of thought and practice. So that is where I principally work—in the overlaps between media, environmental sustainability and social justice movements. I think my education at Dickinson helped make me feel at home in these emergent, dynamic spaces.

My favorite activity was probably Geology Club. We had this great happy hour on Fridays, where we got together, had a few drinks and told bad geology jokes. It doesn’t get much better than that.

An international lifestyle was certainly part of my Dickinson experience, and it remains a big part of my life today. I studied abroad in New Zealand while at Dickinson, and then I spent the better part of my 20s living outside the country. First, I moved to Japan, and then I traveled for a while on my own through Asia and Siberia. In 2007, I received a Rotary Ambassadorial Scholarship to pursue a master’s degree in environmental sustainability at the University of Edinburgh in Scotland. I lived and worked in Scotland for about four years. There I met my wife, and in 2011 we moved to Washington, D.C. Now, we live in Charlottesville, Virginia, with our two kids, a little boy and a little girl, and they have dual citizenship between the U.S. and the U.K.

My working life involves a lot of travel as well. In the past six years, I have worked in the Arctic, the Amazon, the Himalaya, Uganda and British Columbia.

There’s not a single great memory—but rather it’s the deep sense of community that has stayed with me over the years. Dickinson’s personalized learning environment really worked for me. My friends from Dickinson are still among my closest friends, and I’m still close with several of my professors.

My sister attended Dickinson not long after I went, and my mom is also an alumna, so the three of us go back quite frequently for events. I’m also in close touch with my Dickinson friends. But probably the biggest way I stay in touch is through the geology department. I’ve come back for retirement celebrations for several professors, and Dr. Marcus Key, Joseph Priestley Professor of Natural Philosophy, and Dr. Ben Edwards, professor of earth sciences, and I keep up a friendly email and letter correspondence. Dr. Key also visited me while I was in Edinburgh. We stayed up one night drinking whisky, quoting Lebowski and jamming out to Bob Dylan. We had a blast!

As I mentioned earlier, I studied environmental sustainability at the master’s level in Scotland. The program made one thing abundantly clear to me: If you take the time to look closely at environmental issues, you come to the conclusion that the way in which we are currently living simply isn’t sustainable. Our over-consumption of natural resources is undermining the fabric of our economy and eroding the health of the natural systems on which we depend.

But the biggest question isn’t really about science; we know the way that we are living isn’t sustainable. To my mind, the bigger question is this: How can we raise scientific literacy and shift attitudes and behaviors corresponding to these issues? How can we elevate voices of frontline communities and social innovators who are pioneering solutions to these problems? How can we empower and inspire young people to create the world that they want to see? I think the biggest challenge in front of us is about changing the narrative about what it means to live well on this planet without destroying it. So that is where I work; I run a production company that partners with academics, community leaders and nonprofit organizations to tell these stories. It is a really exciting time to be a photographer and a filmmaker because there are so many great stories to share about amazing people doing this critical work.

As an independent photographer, filmmaker and journalist, I’ve had the opportunity to work all around the globe. Recently, I’ve been focusing a lot of my work in the Arctic, which is truly on the frontlines of climate change. My big project there is Into the Dark, which is a documentary film, a series in Vox and a photography feature in National Geographic. I shot the project while on a three-week winter expedition into the Arctic, and it explores the relationship between melting sea ice and light pollution. During the time of shooting, we were probably the northernmost people on the planet. The project is now out in film festivals, and I’ve been invited to present it at the 2021 U.N. Global Climate Conference.

Right now, I am a climate journalism fellow at the Bertha Foundation and am working on a long-term project about climate migration in the U.S. Climate migration is, of course, already an important issue in this country, and it is only going to become more pressing as the climate crisis continues to escalate. Critically, the project is looking at leadership and solutions in the face of these unprecedented challenges. The work is called Eroding Edges.

Not long after I graduated, I spent six months hiking the Appalachian Trail. Much of that time was spent in silence. It was a profoundly life-changing experience for me. But the biggest change in my life was becoming a father. I can’t think of anything that even remotely compares to that. My kids are my greatest teachers. I’ve been on a lot of adventures, but it is the journey of the heart that is by far the most interesting.