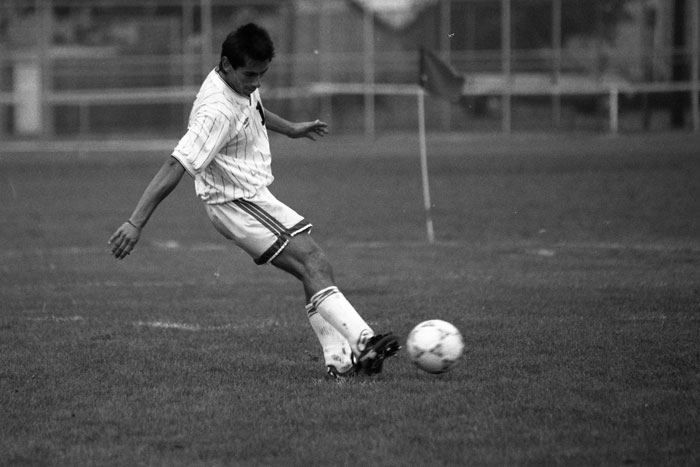 Former soccer star reflects on his journey from Bolivia to the U.S. to Dickinson

Javier Palazuelos '95 is grateful for everything Dickinson was able to offer him—from a chance to continue playing the sport he loved to building skills that have benefited him in his life beyond the limestone and brought him success personally and professionally.

The Red Devil soccer standout grew up in Bolivia and didn't come to the United States until he was 17 years old. He came here to attend one year of high school in Camp Hill, Pennsylvania, and was hosted by an American family that had befriended his family while they were living in Bolivia. "George and Connie were and are wonderful and amazing people," Palazuelos says. "They are my American parents. They helped me get into high school and then Dickinson."

You could say soccer was in Palazuelos' blood from birth, as his father was a professional soccer player. "He even went as far as representing the country in the '50s," says Palazuelos. "That was when soccer was becoming more popular and moving from an amateur sport to a professional sport." However, what truly brought out his love of the game were the Sunday matches with his father, brothers and his father's friends and their kids. These were the memories that Palazuelos still cherishes.

During his one year in high school here in the States, Palazuelos excelled on the field and in the classroom, gaining attention from local colleges. "I was able to talk to the people at Dickinson with the idea of playing soccer while also receiving financial aid because I was a good student," Palazuelos says. "But I also had the opportunity to go to the University of San Francisco where my father played, and I was offered a scholarship so I had a choice to make." Eventually, it became a no-brainer for Palazuelos, who decided to attend Dickinson, where he felt that he could excel academically as well as enjoy being a student-athlete.

Reflecting back on his time "Wearin' the Red," Palazuelos recalls that "it was a great experience being with teammates, who were also students and focused on their studies." Palazuelos also remembers the talent the team had and likes to think "we helped push the program to the next level because of the class we had. I had and have wonderful experiences and memories."

Palazuelos was a highly decorated player during his time as a Red Devil, becoming a three-time All-Conference selection and earning first-team honors in the Middle Atlantic Conference in 1992. Dickinson transitioned to the Centennial Conference (CC) in 1993, where Palazuelos earned a pair of all-conference honors and was named the league's first Player of the Year in 1993. He led the CC in scoring in 1993 and remains the school record holder in goals and points with 56 and 128, respectively. He still ranks sixth in career assists and holds the top two spots for points in a season and ranks first and third in goals. Palazuelos also played a key role in leading the Red Devils to back-to-back Eastern Colleges Athletic Conference (ECAC) Tournament appearances, including an ECAC Championship in 1993.

Off the field, Palazuelos found a passion for economics, thanks in large part to Professor of Economics Michael Fratantuono. "He was a wonderful professor, who made me love economics," Palazuelos says. "I was okay at math and physics but not gifted, so I didn't think I was going to get into economics. He made me love it and really challenge myself." Palazuelos also found an interest in environmental studies and is adamant that a liberal-arts college gave him the ability to study in different areas. It all comes back to balance for Palazuelos, who believes that having a balanced approach in your education is the best way to prepare for the challenges and experiences you will have in your professional career.

His legacy as a student-athlete still lives on at Dickinson, as Palazuelos was inducted into the Dickinson Athletics Hall of Fame. "It was very, very touching and an honor," Palazuelos says. "I don't know if I deserved it, because there were so many athletes who were just as committed, perhaps even more committed than I was, but I received it with a great sense of pride."

No matter what Palazuelos accomplishes in life, both personally and professionally, he credits Dickinson with helping him achieve success. "Great memories, great memories of amazing people that I met, whether it was students, teammates, coaches, administrators or coaches ... and how they all shaped me as a person," Palazuelos says. "Dickinson was a very important part of my life that made me who I am."