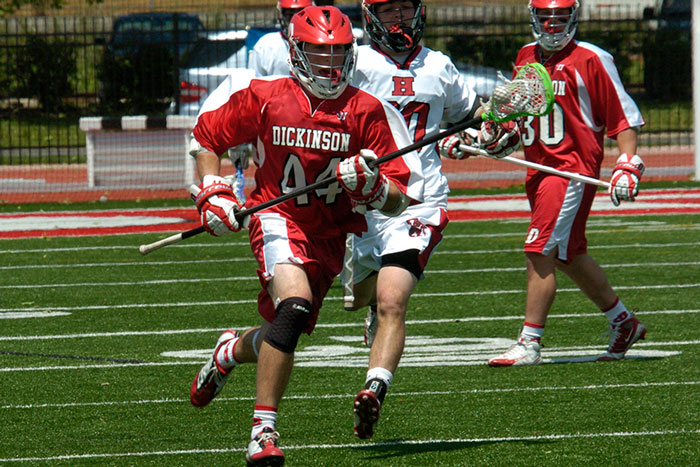 Brandon Palladino '13 (political science) was a part of one the most memorable and dominant runs in Division III lacrosse, let alone at Dickinson and in the Centennial Conference. Below, he talks about how it was all a result of a mentality that was inherited from past players, who helped launch a dynasty.

Palladino grew up in Basking Ridge, New Jersey, where he attended Ridge High School. He grew up playing a variety of sports and actually played baseball until he was in seventh grade. "My dad grew up on Long Island and had played football and lacrosse his whole life," Palladino says. "At that point I was getting bored with baseball and wanted something more active, so I picked up a lacrosse stick. I started off as a short-stick midfielder and then picked up a long pole in ninth grade and began the transition from offense to defense."

When it came time to look at colleges, Palladino knew he wanted a strong academic institution and had heard about Dickinson through the alumni network at Ridge. While attending a camp at Fairfield University, he had a chance encounter with then Dickinson Assistant Coach Brendan Dawson, a standout college lacrosse player in his own right. Coach Dawson talked about how he envisioned Palladino playing and that he could come in and compete right away for a starting position, which, as Palladino, says, "is something every kid wants to hear." He planned a visit, met Coach Dave Webster, loved the campus and town, and then it became a fairly easy decision from there.

A disappointing loss to Haverford College in the 2010 Centennial Conference playoffs served as a great motivator for Palladino and his classmates as the team began an unprecedented run. "We worked much harder that summer. We hit the wall, hit the gym and got into better shape," Palladino says. "We wanted to come back in top condition, so by the time we got into fall ball we were in high gear and ready to go."

That attitude helped the program embark on a run that saw the Red Devils end a 36-game losing streak to Gettysburg College on April 6, 2011. They would knock off the Bullets in the Centennial Conference championship to claim the program's first ever title.

Despite the loss to Haverford conference semifinal in 2010, the Red Devils earned an at-large bid to the NCAA tournament. The Red Devils made their second straight NCAA appearance in 2011, posting a remarkable record of 17-2. In 2012, the Red Devils finished 15-4, claiming another conference title and again earning a trip to the NCAA tournament. Palladino and his fellow seniors would make their final campaign a truly memorable one, helping the Red Devils to a No. 2 ranking in the country, a three-peat as Centennial Conference champions and an 18-1 overall record. "As a senior class, we wanted to make a historic run and leave an impact on the program," Palladino says. "It was really impressive looking back at what we had done as a class on and off the field, and we were proud overall of what we had accomplished."

Palladino was named the 2013 United States Intercollegiate Lacrosse Association - Iroquois Award as the National Player of the Year and First-team All-American for the second straight season. He was also named the Division III Long Pole Midfielder of the Year, earning that honor for the second straight season. He was voted the Centennial Conference Player of the Year and became the first player in conference history to earn First-team All-Centennial honors all four years of his career. After being selected to play in the USILA-Laxworld North/South Senior All-Star Game, he showed remarkable character as a true leader and team captain. The Red Devils had four players invited to play, but each team is only allowed to send three. Palladino surrendered his spot to allow his teammates the opportunity to participate.

Now carving a successful career path in financial services, Palladino draws on the lessons learned at Dickinson and recognizes the impact his education and athletic experiences had on him.

"At a bigger school you may be more specialized, but you don't have the well-rounded background to know or understand the other things going on in the world," Palladino says. "When you become part of a team at a company, that well-roundedness can help you understand everyone, how they think and their different insights, which allows you as an individual to help your team more."

The bonds built in Carlisle have lasted Palladino long beyond Biddle Field and the limestone walls. As he puts it, "When you have the next-level type of connection both on and off the field, that will result in you wanting to fight and scrap for someone else and for the greater good of the team in general."