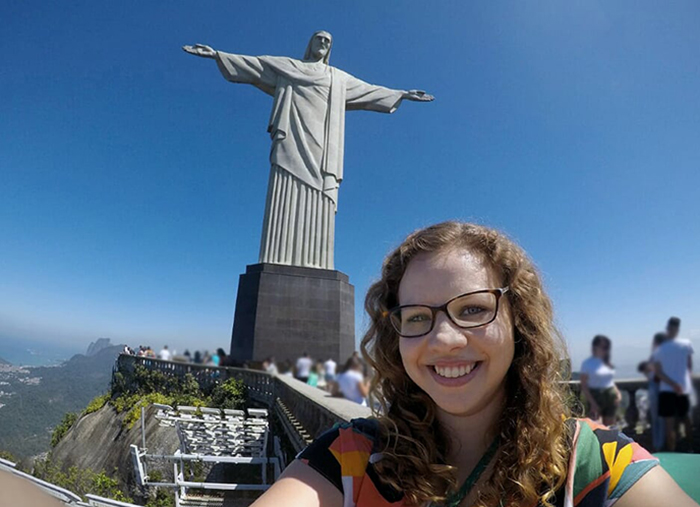 Aline Scop Plavnik ’09 was traveling when the global coronavirus pandemic swung into high gear. “At first, everyone was a little lost,” says Plavnik, a tour guide and entrepreneur in Rio, which relies heavily on international tourism for its local economy. “But after about a month or two, I started to see some virtual tours popping up online, and I began to think about doing that too.”

Plavnik is among the growing number of Dickinsonians and global citizens responding to the pandemic with grit and creativity. Speaking by Zoom from her home in Rio, she described her journey and the hope she’s found amid crisis.

Plavnik attended Dickinson on The Global Campus Scholarship, declared a biology major and studied abroad in Australia. She was involved with College Choir, the Portuguese Club, APO, the step team and the Asbell Center, but it was her time as a Liberty Cap tour guide and international-orientation volunteer that left the deepest impression. “I’m a people person, and I really loved talking with people, helping them learn and showing them around,” says Plavnik.

Working in a lab after graduation, Plavnik missed the person-to-person connections of her tour-guide experiences. She also wanted to continue to explore global cultures. A career in tourism—first, with a study-abroad program, and then at a tourist agency—was a perfect fit.

Five years in, and after working with high-profile clients during the 2014 Brazil World Cup, she earned tour-guide certification from Brazil’s Ministry of Tourism. As a freelance, full-time tour guide certified in her city and state and internationally, Plavnik specializes in bilingual cultural and historical tours, and she handles all aspects of her business, including Facebook and Instagram marketing. She took a financial hit when the post-Carnival tourism season in Rio came to a grinding halt last March and was invited to join the Brazil Virtual Tour Project last June.

The Brazil Virtual Tour Project offers live, virtual tours of Brazil for people unable to travel, including those who wish to get a good idea of the places they can visit as they plan post-pandemic trips and those who want to reminisce about past trips. Drawing on stories from her years of experience in the industry, Plavnik uses photos and videos—many taken personally, during past tours—to bring the Brazilian experience into people’s homes.

At the time of this writing, Plavnik had led four 20-person tours and was planning several more, delivered in Spanish and English. And as her city begins to open up again—unlike much of Brazil, Rio is now in reopening phase five—she has also delivered one in-person walking tour. When the virus subsides, Plavnik plans to continue to offer remote tours as well as in-person events.

While the pivot online helps her financially, she also appreciates the chance to reconnect.

“After a couple of months of not seeing very many people, it was so good to chat with people from all over the world, even through the screen,” says Plavnik, who welcomed clients from the U.S., Australia, Argentina and Brazil to her first tour—including some fellow Dickinsonians. “It’s the best part of my work.”