An Update From President Ensign 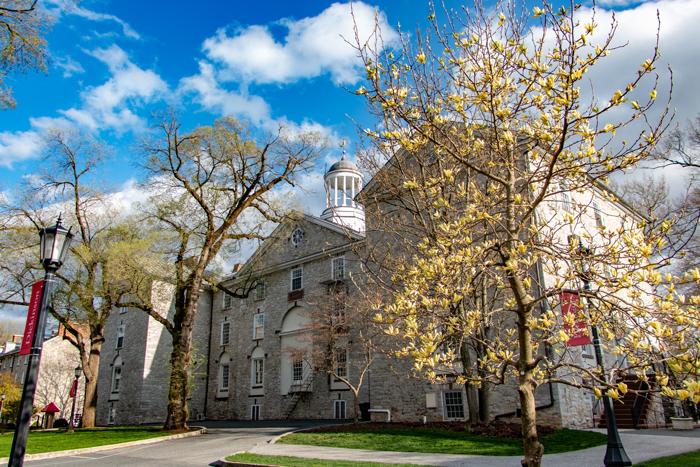 President Margee Ensign sent the following message to the campus community on the recent vandalism of the Benjamin Rush statue:

To the Dickinson Community:

Over the weekend, someone spray-painted the words “slave owner” on the statue of Benjamin Rush in the academic quad. We do not endorse this act of vandalism, but we acknowledge the truth and the anger behind the act. Dickinson’s founder, Benjamin Rush, did, in fact, own a slave, whom he later freed.

Rush was a revolutionary thinker, a signer of the Declaration of Independence and an outspoken opponent of slavery. He believed and said publicly that slavery was a national crime and an offense to God. However, at the same time, he owned an enslaved person named William Grubber.

As we continue our work to become a more inclusive community, we must continue to confront our history. Through the Dickinson & Slavery initiative, faculty, staff and students have been working toward a better understanding of Dickinson’s connection to slavery, and we are taking steps to more inclusively reflect our 237-year history.

In May, the Board of Trustees unanimously approved the recommendation from an all-campus task force to rename Cooper Hall to Spradley-Young Hall, honoring Henry Spradley and Robert Young, two formerly enslaved men and longtime college employees who helped integrate the Dickinson campus in the 19th century. The board also unanimously approved the renaming of East College Gate as the Pinkney Family Gate, honoring Carrie and Noah Pinkney, popular African American food sellers on campus for decades in the late 19th and early 20th centuries. When we return to campus, a ceremony will be held to mark this change.

As another outgrowth of this initiative, we will install a wayside marker near Old West that describes the role of enslaved labor in the early years of the college. That marker will have references to Rush, our founder, and John Dickinson, our namesake, describing their views on slavery.

I know these are small steps, but they are important ones. As we rise up, as a nation, and fight against police brutality and systemic racism, I have asked the President’s Commission on Inclusivity to redouble its efforts to provide educational programming and make the necessary and overdue changes to our policies and procedures so that we can be a more equitable community.

In addition, George Stroud, vice president of student life and dean of students, is gathering a group of students, staff and faculty to discuss recent requests for change from the Black Student Union and other student groups.

We have much work to do to confront injustice, within our institution and in our communities. We are committed to further action, and together we will build a Dickinson that is based on justice and respect for everyone.