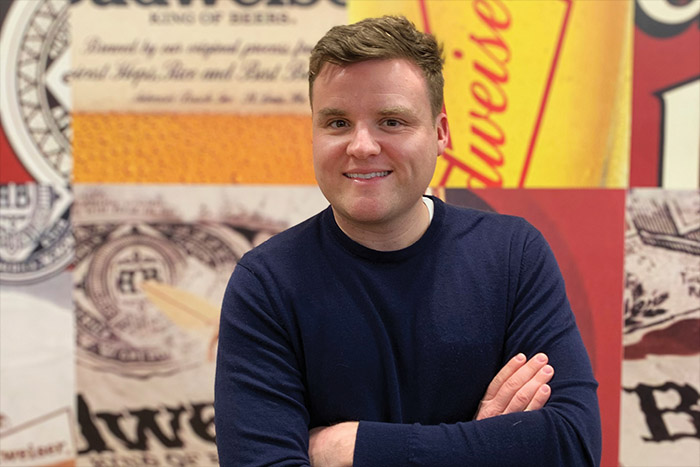 What do selling an indie pop song to Verizon, marketing for a hedge fund, surfing in New York City, figuring out how to buy all of Philadelphia a beer and convincing the Cleveland Browns to celebrate a losing record have in common? The short answer is Ben Martinez ’08, who capitalized on the adaptability he gained at Dickinson to blaze a career path with wildly varying stops that only have one thing in common—success.

After seeing how much his brother, Ryan ’05, enjoyed Dickinson, Martinez came to the college in 2004 on the Samuel G. Rose ’58 Scholarship and threw himself into a wide range of activities. He worked at the College Farm, gained fluency in French, majored in environmental studies, participated in a comparative study of the Chesapeake and Mississippi Delta through the Luce Semester and even took on a summer construction job thanks to a connection Rose provided when they met during an annual Rose Scholarship Dinner.

“Dickinson was a fantastic time,” Martinez says. “An intimate college setting where you could get involved in anything, great academics, great professors who cared a lot and really expanded my outlook.”

After graduating, Martinez put off entering the 9-to-5 world to take a chance on Basement Batman, the indie-pop band he’d launched while still a student. That meant moving to New York City and living meal-to-meal for a while with his bandmates, but it also meant touring the country, cracking into the competitive South by Southwest festival and even selling the song “On a Streak” to Verizon for a commercial spot.

“We made no money for a long time, then sold that song, made a big chunk of money, and then went right back to making no money,” he recalls with a laugh. “But we had a great time.”

After hanging up his guitar, Martinez leveraged his French skills to land a job with the simultaneous translation company Prolingo. He soon moved into a sales and marketing position with the company and parlayed that experience into a marketing job with the hedge fund Angelo, Gordon & Co. a year later.

“Yeah, that’s a huge shift, going from playing in a band to working at a hedge fund,” says Martinez. But he was well prepared for that shift and the many that lay ahead. “Dickinson was an incredible place to develop the kind of flexibility and confidence you need to just jump on every opportunity,” he says. “That’s what I did. I just kept grinding.”

The next grind came when Martinez turned his newfound love of surfing (“Yes, you can actually surf in New York City, at Rockaway Beach,” he notes) into a position as global manager of partnerships with the newly formed World Surf League.

“When I saw that league pop up, being the kind of scrappy Dickinson grad I was, I just sent a cold email to the person whose contact information they had on the press announcement,” he says.

The bold move paid off in a three-year stint building the league’s marketing partnerships with brands like Anheuser-Busch and traveling to events in Tahiti, Hawaii, Brazil and Australia. Working closely and successfully with Anheuser-Busch then gave Martinez the chance to make his biggest move yet, becoming the director of Bud Light Sports Marketing in 2017 and managing a $180 million portfolio of brand partnerships with the NFL, NCAA and NHL for one of the world’s most popular beers.

“I kind of sat between the brand and those properties,” Martinez explains. “I would work with our marketing team to take their ideas and collaborate with the teams and leagues to bring Bud Light to life in fun ways that connect with sports fans.”

At its simplest level, it’s hammering out agreements to put team logos on beer cans and bottles, but at its most complex, it’s a job that demands quick, creative thinking, careful negotiation, and strong leadership. Take, for instance, when the Philadelphia Eagles lineman Lane Johnson joked at the start of the 2017-18 season on Twitter that if the Eagles won the Super Bowl, he would buy the entire city a beer.

“Someone on our social team responded that if that happens, we’ll foot the bill to give everyone a Bud Light,” Martinez recalls. “Lo and behold, the Eagles have this Cinderella season, and we had to figure out in a very short time how to give away free beer to the city of Philly.”

The solution was to give Bud Lights away at the team’s Super Bowl celebration parade and re-dub Bud Light’s “Dilly Dilly” slogan “Philly Philly” for a day. The next fall, getting the Cleveland Browns to celebrate two years of failure took some careful negotiating when Martinez brought to life his most widely noted partnership: “The Bud Light Victory Fridge.” After learning that Cleveland threw the team a parade after a winless season that followed a one-win season, Martinez saw the opportunity to highlight the Browns fans’ passion in a way that would also spotlight Bud Light. The promotion installed in Cleveland bars padlocked Bud Light-filled refrigerators that would only be opened when the team finally won a game.

“My job was to get the Browns on board,” says Martinez, recalling the meeting in Cleveland where he sold the Browns’ marketing team on the idea. “I said, ‘Guys, listen, stick with us here. We’re not doing this to poke fun at you. We’re doing this because we want to reward the loyal fan base and be a part of their celebration.' ”

As the Browns fought to a close loss and a tie in the first two weeks of the season, the promotion gained national attention, which culminated in the Browns’ Week 3 nationally televised Thursday night win over the Jets and the opening of the Victory Fridge.

“It was really the perfect storm for us,” says Martinez. “The Browns had become that underdog story everyone could get behind, so they were almost like America’s team at that point, and everyone knew about the fridge and our beer inside it.”

These days, Martinez has moved away from beer as the sponsorship director for Anheuser-Busch’s Beyond Beer Portfolio. With the trend of hard seltzer, single-serving wine and canned cocktails gaining steam in recent years, he’s now working to forge sports and entertainment sponsorships for brands like Bon & Viv Spiked Seltzer, BABE Rosé and Cutwater. Wine and football may seem like a difficult match, but with the skills Martinez gained at Dickinson, he’s definitely up for the task.

“Everything I’ve been able to achieve in my career has been through working with other people, and I think that’s what Dickinson prepared me very well for,” says Martinez, who’s already made BABE Rosé the first official wine of the NFL. “That mentality of collaborating with a diverse group of people all coming from different places with different ideas—that’s something I learned at Dickinson, and that’s something I still rely on every day.”