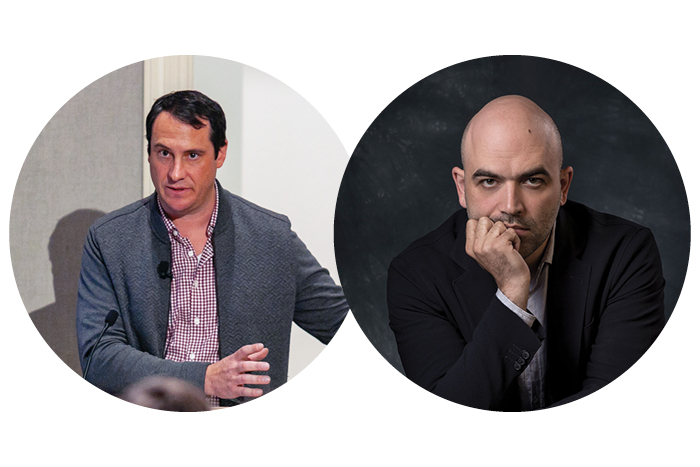 Each year, the Cogan Alumni Fellowship and the Harold and Ethel L. Stellfox Visiting Scholars and Writers Program bring industry leaders to campus to connect with the Dickinson community. These experiences are of particular value for students, offering unparalleled insights into a variety of careers and allowing them to make firsthand connections with experts and alumni. Both of these programs are named for women who have made a lifelong impact on Dickinson through their passion and their generosity.

The Cogan Fellowship is named in honor of Eleanor Cogan. After her retirement as a research chemist, Eleanor took 52 courses at Dickinson, 32 of them in the English department. She was recognized with an honorary doctor of letters degree during Dickinson’s 2003 Commencement. When she passed away in December 2011 at the amazing age of 102, the fellowship was created to honor her extraordinary commitment to lifelong learning and to the study of English literature. Cogan Fellows are all Dickinson English graduates and have included news anchors, screenwriters, educators, editors, curators, poets, entrepreneurs, theologists and more.

This year’s Cogan Fellow was John Orlando ’96, senior vice president of live-action production at Universal 1440 Entertainment. He shared his unconventional path and how his English major and time abroad and as a tutor at the Writing Center gave him a leg up.

“Compared to film school, where all students did was learn about film and watch movies their whole lives, I had attended a liberal-arts college and studied abroad,” he said. “I provided that outside perspective.”

Orlando firmly believes that for those who study English to be successful, they should learn as much as possible about as much as possible, check under every rock, walk through every door, always keep writing new ideas, understand their abilities and limitations and take pride in their passion.

“One the most exciting parts of this business,” he said, “is taking the seed of an idea and turning into something that will be put on a screen for people to come enjoy and love.”

The Stellfox Program was named in honor of Jean Louise Stellfox ’60, who was inspired to become an English teacher after meeting Robert Frost during the poet’s visit to Dickinson in 1959. When she died in 2003, Stellfox’s estate provided $1.5 million to the college to continue her mission of inspiring students through literature. Stellfox established the gift in honor of her parents, Harold and Ethel L. Stellfox. Previous Stellfox Award recipients include Pulitzer Prize-winning playwrights and poets, a Nobel laureate, a Guggenheim Fellow, a National Book Award winner and MacArthur Fellow, a Tony Award-winning playwright, an award-winning novelist and journalist and two Booker Prize-winning authors.

This year’s recipient of the Stellfox Award is award-winning writer Roberto Saviano, author of the Italian mafia exposé Gomorrah. His writings also include Piranhas, a novel about teenage mafiosos, and ZeroZeroZero, an investigation of the global cocaine trade that has recently been adapted into a TV series for Amazon Prime Video. Saviano is known for his courage and zeal in speaking out against organized crime, and when he was condemned to death by multiple Italian mafia families more than a decade ago, he didn’t know what his future would hold. His five-day residency in March included a public reading, exclusive book signing and award ceremony; a Q&A session; classroom visits and workshops; and small group gatherings with students and professors.

“There was a buzz following him everywhere he went, and he was incredibly generous with his time and advice for students and faculty,” said Adjunct Faculty in Film & Media Studies James Guardino. “Roberto said being on campus was ‘paradise.’ ”

Saviano praised Dickinson’s academic traditions and culture: “It was a unique experience that gave me not only a strong emotion when meeting curious and passionate students, at times surprised by what was said, it also left me with a feeling of hope—the possibility that study and research are still the fundamental elements that bring people together.”