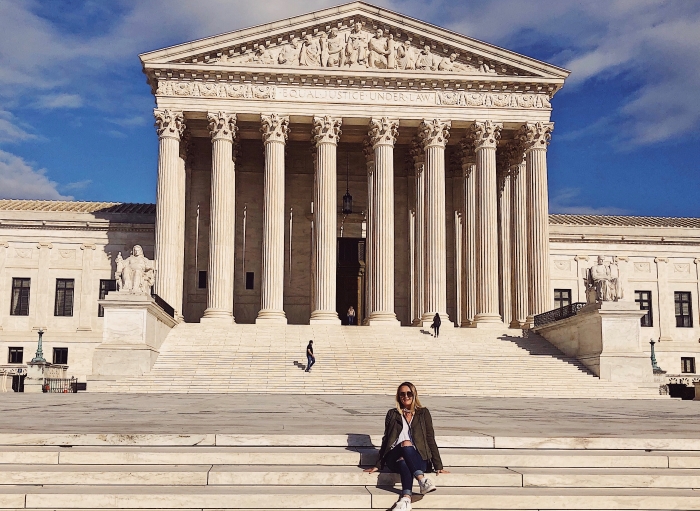 Macy Young ’21 has long been interested in, political life and the legal system. The great-granddaughter of Harry Hopkins, who worked with President Franklin Delano Roosevelt to end the Great Depression, Young studies political science and law & public policy at Dickinson, and she’s currently taking part in Dickinson’s Washington Center program, which combines high-level internships with classroom learning and city-immersion experiences in the U.S. capitol. She’s working with the DC Bar Foundation and conducting original research on gentrification in Washington, D.C.

The connections I have made at Dickinson will last for life. They have helped me grow, especially my friends in my majors. They push me to explore different aspects of my major that I did not know I was interested in until now.

Salmon on a Greek salad.

My favorite class at Dickinson was Negotiation and Advocacy [with Adjunct Faculty in Policy Studies Edward Guido ’72]. I took that during the spring of my sophomore year. That class taught me how to write opening statements and closing arguments and how to debate a controversial case. Our class did a mock trial in the courthouse in Carlisle. We were also able to witness a death penalty trial in that same courthouse, which Judge Guido allowed us to observe. That led me to take the current course I am in, on the death penalty. Judge Guido has inspired me to consider becoming a defense attorney rather than only focusing on criminal justice reform.

Favorite professor.
Professor of Political Science Jim Hoefler is my favorite professor at Dickinson, and that is not just because he is my advisor. He has taught me how to be passionate about any policy I plan on reforming. While taking Foundations in Policy Studies, we worked on many different policies, and every project we did exposed me to a new field of interest.

Little-known hobby/talent:
I love to ski and snowboard.

I am currently in the Washington Center Program in Washington, D.C. I am an intern at the DC Bar Foundation. One of the highlights on my experience here is editing testimonies that my CEO gives to D.C. Council. Another highlight is being able to go to museums in D.C. whenever I want after work. It is so freeing to be in such a lively and young city.

Harry Hopkins, my great-grandfather, who helped end the Great Depression with FDR. He was FDR's top aide during the Great Depression. I love hearing stories from my grandmother about him. I wish I could have met him, because he started as a social worker in New York City and became the head of a few of the New Deal programs.

I am interning at the DC Bar Foundation, which does civil legal aid work in D.C. Helping families stay in their homes when they are being unlawfully evicted is most appealing to me. My internship allows me to go to the D.C. Tenant Courthouse and observe eviction cases, which can be sad sometimes when people are not aware of the help our organization provides. I definitely learned that I would rather not be the middleman giving out grants to organizations representing families with low incomes in D.C., but I would rather work with the organizations directly helping D.C. residents with low incomes. The work that the DC Bar Foundation does for D.C. is so crucial for underserved D.C. residents. I love editing testimonies for them and creating briefing books for our CEO to testify in front of the D.C. Council. Without these testimonies, underserved D.C. residents would not have easy access to legal aid.

I am currently doing an independent study on gentrification in Washington, D.C. I am comparing D.C. to New York City. Over the past 10 years, New York City was able to successfully gentrify the city without increasing their poverty rates. I plan to evaluate the steps New York took to provide enough affordable housing for New York residents with low incomes. I will compare this data to Mayor Bowser’s plan to gentrify the city while also creating enough affordable housing for families being evicted from their homes due to the increase in rent. My interest in this study came from my internship at the DC Bar Foundation. From the research that I have done so far, I learned that gentrification is not always a bad thing.

My post-Dickinson plans are not set in stone. I am thinking of working for a year after Dickinson while I study and prep for the LSAT and GREs. My end goal is to be a lawyer in D.C. I am not sure I will work within the criminal justice system or work on criminal justice reform.