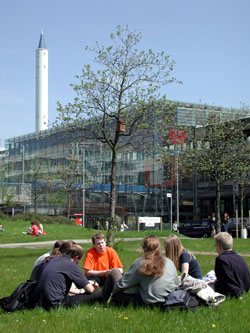 The University of Bremen, a Dickinson global-partner.

Dickinson's host institution in Germany, the University of Bremen, was named as a grand-prize winner of more than $1.2 million in research funding from the German federal government's Excellence Initiative. Launched in 2005, the German Excellence Initiative is a competition focused on enhancing academic research capabilities in a nation where higher education is publicly funded.

Established as one of Dickinson's global-partner institutions in 1984, the University of Bremen enrolls 18,000 students, including approximately 10 German-proficient Dickinson students. Long renowned for excellence in interdisciplinary study, research-based teaching projects and focus on internationalization, the university also won support during the competition for its Center for Marine Environmental Sciences and International Graduate School of Social Sciences.

"The University of Bremen has always been a capable and creative partner in our global programing," said Brian Brubaker, director of education abroad and associate director of global education at Dickinson. "It's always rewarding to work with a partner that has global competencies and priorities similar to one's own."

Dickinson offers 40 study-abroad programs in 24 countries on six continents and is recognized as a leader in global education by the Institute of International Education. With approximately 60 percent of Dickinson students studying abroad—seven times the national average—Dickinson is one of the top 20 baccalaureate institutions in the nation for the total number of students who study abroad and is among the top three for students who spend a full academic year abroad.