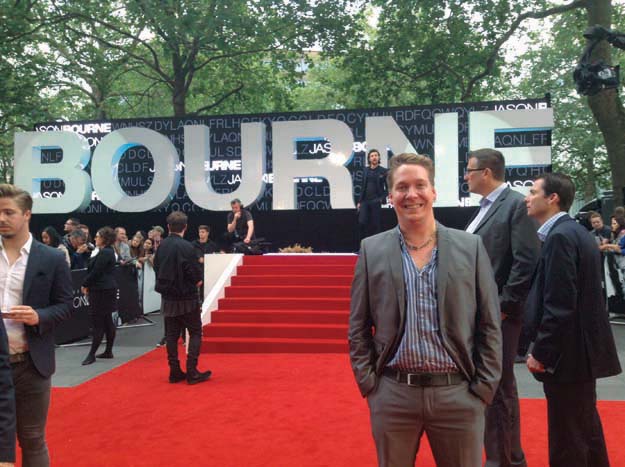 By his mid-20s, Jonathan Haworth ’04 had two advanced degrees and several global adventures in his back pocket; he’d also made stage appearances in London’s West End. His next adventure: TV journalism. But with no related degree or experience, would he really be able to break into this notoriously competitive field?

A Washington, D.C., native, Haworth majored in American studies at Dickinson—a subject broad enough to wrangle his diverse interests—and studied abroad in London during spring of his junior year. He was elected twice as class president and once as VP, sang a cappella with the D-Tones, was a WDCV officer/DJ, gave campus tours, joined a fraternity, played intramural sports and got involved as a community volunteer.

“On a typical day, I ran into him at least once—he was everywhere,” affirms Haworth’s sister, Susannah Haworth Dunn ’06, who fondly remembers being roped into her brother’s campus tours at the spur of the moment. “It was his enthusiasm that convinced me that Dickinson would be a great school for me too. He has a contagious joy for life.”

After Dickinson, Haworth earned two master’s degrees— in cultural studies at Goldsmiths College, University of London, and theatre at London Centre for Theatre Studies. Then he gave acting a go, appearing in West End productions of Vegemite Tales and Dark of the Moon.

Haworth enjoyed the work, but not the modest and unpredictable income. With his 30th birthday looming closer, he switched gears to a stable job at a public relations firm. It seemed a good idea at the time, but …

It wasn’t a crazy notion: Journalists are quick, tenacious, adventurous, socially intelligent, curious and personable—all signature Haworth traits. So despite the odds stacked against him—odds that continued to grow exponentially, as news outlets folded—Haworth dived in.

“What I learned at Dickinson was that I could try new things without fear of failing,” he explains. “I learned I could make my life what I wanted it to be. I learned to  say ‘yes.’ ”

Haworth sent out resumes for nearly two years. Every weekday for six months—until he was asked to stop—he called a hiring manager at ITV News. Then, on his 29th birthday, when an ITV journalist trainee opportunity opened on Capitol Hill, Haworth got the call.

As a new journalist, Haworth took every available shift and learned all he could. A job offer followed at ITN London, which in turn led to field producing, producing and news editing “permalance” gigs with Sky News, NBC London and CBS. Moving into the digital realm, Haworth oversaw 20 reporters, selected and published stories, wrote scripts and put his acting chops to work in video voice-overs as news editor at Newsweek’s London bureau. And in 2019, Haworth was named London news editor at ABC, one of the mostread, most-watched American outlets. 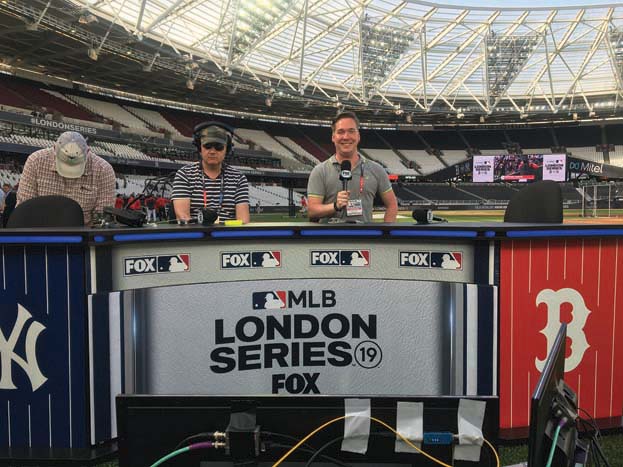 Over the years, Haworth has interviewed NFL stars and Olympic athletes. He covered the assassination of Muammar al-Gaddafi, the trial of Conrad Murray, the 2015 Paris attacks and the terror attacks at London Bridge. Small-news moments also stand out in his memory—most recently, a piece that generated thousands in donations to cover medical expenses for an abused puppy, while sparking national conversation about animal abuse laws.

“I have to pinch myself. I can’t believe that I get paid to ask people questions, travel, learn about the world and tell stories like these,” says Haworth. “The notion that somebody has given me the keys to this car? I’m very blessed.”

Chatting by phone from the pub where he’d stopped for a quick after-work pint before dinner with husband Nick Munn, Haworth is remarkably chipper for 8:30 p.m. on a weeknight, given the chronic sleep deficit that plagues his profession. He remains in touch with close Dickinson friends, and he makes time each year to meet students during Dickinson’s annual student-alumni networking event in London. He’s currently mentoring two.

“I tell them that it’s OK if they don’t know exactly what they want to do yet, because most people change jobs several times anyway,” he says. “If they stay open, work hard and keep trying new things, they’ll find the job that fits.”