Wherever There’s a Court 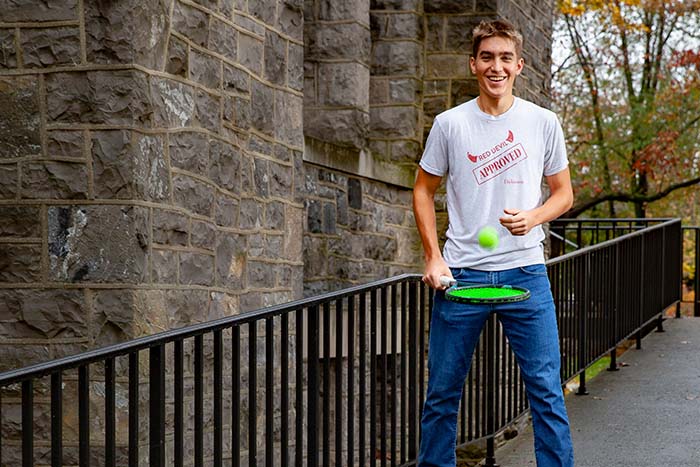 Leo Sorkin ’22 (computer science) made a strong debut on the tennis team, earning Centennial Conference Player of the Week two times and first-team honors in singles and doubles competitions as a first-year student. But Sorkin’s tennis career originated long before his Dickinson days; it started as a family rivalry.

“I have an older brother who played tennis before me,” says Sorkin. “At the beginning and when I was small it was more like a competition, so I couldn’t stop playing because he was playing, and I couldn’t lose to him.”

Sorkin went 13-5 in singles last year (only dropping one Centennial Conference match), won nine out of 10 singles matches and was ranked 18th in the Atlantic South regional poll. While continuously dedicating time and energy to tennis, Sorkin balances his athletic career with a web developing work-study at the Media Center.

Sorkin began his NCAA career expecting the rigor of 5 a.m. practices, afternoon fitness sessions and endless weekend matches. He took these challenges in his stride, becoming the first Dickinson tennis player to be named Centennial Conference Rookie of the Year—without even knowing the recognition existed. One of three international students on the team, Sorkin was born in Russia and moved to Spain when he was 11. The previous Dickinson tennis coach caught his interest by enthusiastically recruiting him via email and Skype, ultimately convincing Sorkin to apply Early Decision.

Sorkin has played wherever there’s a court, in Russia, Spain and now the United States. While his life at Dickinson is far from home, with the family-like support of the tennis team, he continues to thrive.

“I love my teammates. I feel like the team is my family. That’s more important than how the team performs in general. I believe that we’re going to be friends forever.”

Sorkin and Sam Coan ’22 finished their debut season 16-4 overall in doubles, tallying 16-0 in dual matches and 9-0 in Centennial Conference play. During the 2019 fall season, many upper-level players studied abroad, providing Sorkin the opportunity to step up as a sophomore captain. He led the team through two practice matches and has his sights set on a successful spring, when the Red Devils’ season kicks off on March 10 against Hampden-Sydney, during the spring break Florida trip.

“I can’t get Rookie of the Year anymore, right?” he says with a laugh. “I’m not as concerned with how I perform as much as I hope my teammates can perform well too. While I’m at Dickinson, I hope to learn as much as possible while I have time. I really hope I can get to regionals at some point, and I hope I can get an internship over the summer that will help me with my future.”

“Leo is hard working and disciplined on and off the court, and when he shows up for match day he’s focused and in the zone,” says Head Tennis Coach Brad Tulenko. “Leo hits the ball insanely hard, and the work that goes into that—from the footwork all the way up to keeping his head still—is amazing. His focus and determination are unmatched.”