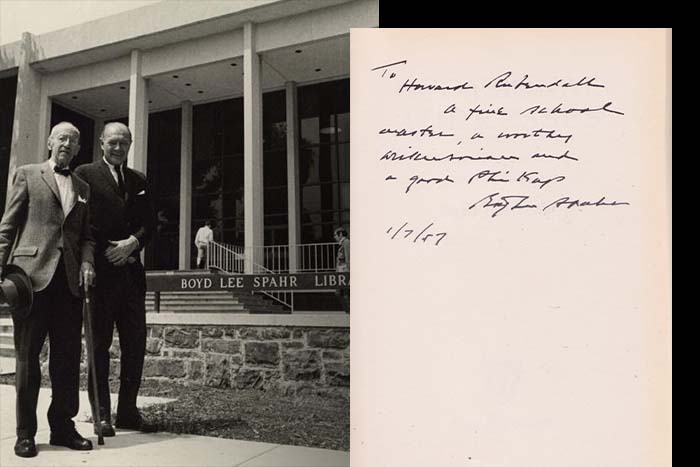 At left: Boyd Lee Spahr, class of 1900, stands outside the Spahr Library with President Howard Lane Rubendall ’31 in 1967. (From the Dickinson Archives.) At right, a copy of the inscription discovered by Bainbridge.

I was exiting the library on Homecoming Weekend when a sign on a book trolley caught my eye: “Free Books—Take as Many as You Want.” A small book captured my attention: Occasional Addresses, published by Philadelphia-based Lea & Febiger in 1956. Inside the cover was a handwritten inscription: “To Howard Rubendall, a fine school master, a worthy Dickinsonian and a good Phi Kap—Boyd Lee Spahr, January 1, 1957.”

I was holding not only a piece of the college’s history but also a part of my own—a book written and signed by our library’s namesake and published by the now defunct 200-year-old firm that gave me my first editorial job.

Because Lea & Febiger was a medical publisher, my guess is that Spahr’s volume was a vanity publication; it was so different from the textbooks the firm produced at the time, like Gray’s Anatomy, or the lesser known titles they assigned to me, like Reproduction in Farm Animals, which tested the boundaries of my liberal-arts education and had me running to co-workers’ desks shrieking, “Hey, look at this!” In defense of my professionalism, I was 22 and a city girl.

Instead, as Spahr’s foreword explains, his work was a collection of addresses preserved for his grandchildren. Notable speeches included his 50th-reunion address to the class of 1900 and “Philadelphia: Its Historic Position as a Publishing Center.”

Having given the opening remarks at my 35th reunion dinner, I was curious to see what Spahr had said to his peers 69 years earlier. We both spoke about school pride, and where I had alluded to the high jinks of balancing an empty keg on a Quad building ledge, nothing we did compared with the antics of these turn-of-the-last-century pranksters. As Spahr recounts: "In our days there was a freshman banquet. Ours was at the Wellington Hotel. Despite the physical attack of a piratical group known as the Class of 1899, every member of our class got to the banquet. The following year we were on the offensive and succeeded in kidnapping three of 1901 … and confined them in a country tavern … clad only in their underwear, which plus guards, effectively prevented any escape….”

The class of 1900 had moxie, perhaps edging toward criminal mischief—behavior so unexpected from a man who became a college trustee and served as acting president (1945-46).
But who was Rubendall? The archives revealed that Howard Lane Rubendall ’31 was Dickinson’s 24th president (1961-75). The Spahr library was erected during his tenure, and the Rubendall Recital Hall bears his name.

Without a tall ladder and a can of spray paint, my name is unlikely to appear on a campus building. But leafing through this old book got me thinking about what these luminaries were like in their day and how things might have been if we had attended Dickinson as contemporaries. Mr. Spahr, given our mutual fondness for shenanigans, I believe we would have been great friends—or at least cellmates. President Rubendall, when you caught the vibe of the 1960s and relaxed some campus social policies, I’m sure I would have warmed up to you.
Although I treasure this volume, it is not at home on my shelf. I would be happy to return it to the Dickinson library, or to any members of the Spahr family—after all, the author meant it for you in the first place.

Lori "Bee" Bainbridge (English) lives in Philadelphia, where she spent nearly 15 years in the medical publishing business, working for houses that included Lea & Febiger and J. B. Lippincott Company, leaving the industry in 1998 after serving as managing editor of Current Medicine. She is now a partner at Ardelis Health, a pharmaceutical advertising and strategic consulting agency (LBainbridge@ardelishealth.com).