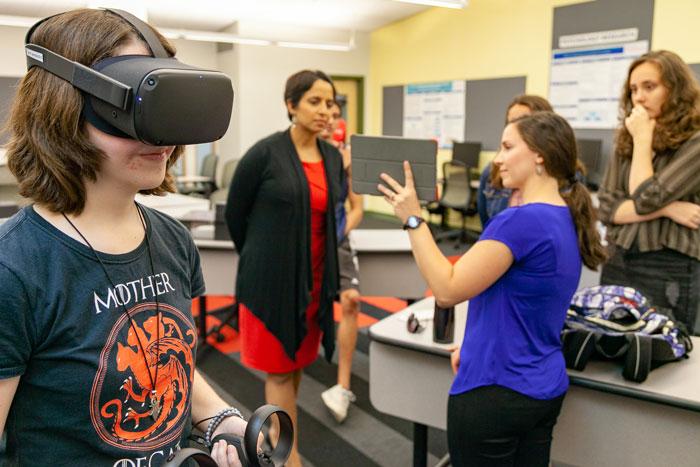 Your knees quiver. Standing up, you gaze into a sea of glaring eyes. What should be an easy presentation slips into a blur. Sweat drips off your forehead: Can the audience see it from here? How do you keep your legs stable at this rate, and what if you fall over in front of everyone? Under their heavy stare, glancing at your notecards, you second-guess: What if I sound dumb? What do I do with my hands? Can I get through this?

The fear of public speaking is nearly universal. Whether in the classroom or office, standing up and presenting ideas in front of a group of listeners makes people question themselves, their preparation, their abilities. And it was this fear that inspired Associate Professor of Psychology Suman Ambwani and students in her Research Methods in Clinical Psychology course to research its subsequent stress levels with a new twist.

Taking a uniquely modern approach, the class's research uses virtual reality (VR) to understand how people with varying levels of anxiety react to and perform in a public speaking exercise involving positive, negative or neutral audiences.

“The virtual reality headsets and 3-D camera have allowed us to create these public speaking scenarios without the logistical and time constraints that would accompany doing this in real-time for each research participant,” says Sivan Komatsu ’21 (psychology ; women’s, gender & sexuality studies). “A common trend in the literature on virtual reality is that it allows researchers and clinicians to create situations in controlled environments that would otherwise not be attainable.”

The Oculus Quest VR headsets are increasingly being used for applied research in clinical psychology. This research allows participants to engage with realistic social scenarios. Their VR-induced reactions are then compared with questionnaire responses, revealing a difference in how people think they will react and how they actually do. All of this links back to Dickinson, because Oculus, the division of Facebook that created the headsets, was cofounded by Dickinson alum Nate Mitchell ’09.

“One of the neat features of using VR for experimental exposure to stimuli is that it allows us to present a much more ecologically valid—i.e., realistic—scenario to participants than more traditional video-based or narrative-based exposure procedures,” says Ambwani. “So if we were to ask participants to read a short script and imagine themselves in that scenario, that’s much less realistic than placing them in an immersive VR environment where they really feel like they are in that scenario—and therefore their reactions to that scenario are likely to be much more realistic.”

Although VR hasn't made it into mainstream clinical practice, it’s starting to be used for people with anxiety disorders, eating disorders, schizophrenia and substance disorders. In the future, VR could be a common therapy tool around the country and on college campuses.

“I really enjoyed the novelty of it—there's something exciting about using new technology to look at an existing issue,” said Komatsu. “I also love doing research that involves interacting with participants. All my previous research experience has been with survey research, so I haven't gotten to converse with participants face-to-face and see their reactions to the experimental stimuli. Getting to do this for the first time is so exciting!”