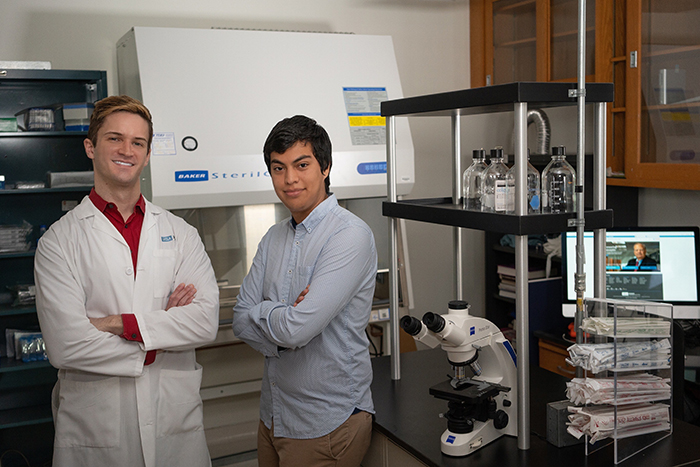 There are two types of warriors leading the battle against cancer—the researchers who generate new knowledge and the practitioners who apply it. As a physician-scientist at UCLA, Theodore Scott Nowicki ’06 wages powerful attacks from both fronts. And last year, he brought a fellow alumnus, math major Egmidio Medina ’18, into the fight, adding up-to-the-minute data analysis skills to the mix.

Both Nowicki and Medina came to Dickinson with plans to become doctors, and both benefited from performing student-faculty research.

Nowicki, a Pennsylvania native, double-majored in music and biochemistry & molecular biology at Dickinson, where he wrote music; played saxophone in Dickinson’s concert band, orchestra and jazz band; performed with Run With It!; and took advanced science classes ahead of schedule. He also conducted cancer research every summer and semester, beginning in summer 2003.

His research began with the 13-week, summertime Pennsylvania Department of Health Carnegie Mellon University Collaborative Project, overseen by Professor of Biology John Henson. Nowicki continued in that project the following academic year, and, with support from the prestigious Beckman Scholars Program grant, he also conducted leukemia research with Associate Professor of Biology Mike Roberts. Along with fellow Dickinson student-researchers, he co-presented at the American Association for Cancer Research (AACR) conference.

Nowicki’s post-Dickinson life launched with a meaningful gesture, when his father, Peter ’71, handed him his diploma during Commencement. He then entered an M.D./Ph.D. program at New York Medical College and served a residency and fellowship at UCLA. Now he's a UCLA researcher and attending pediatric oncologist, serving 20 percent of his time with patients and 80 percent in the lab.

Medina, a Posse Foundation scholar from Los Angeles, got involved in student leadership programs at Dickinson, volunteered extensively and studied abroad junior year. He enjoyed his science classes and distinguished himself as a chemistry tutor and departmental teaching assistant. But he also loved math and ultimately declared a major in that field.

Like Nowicki, Medina worked on the Dickinson leukemia-research project, but with a key difference. Whereas Nowicki and fellow student-researchers used high-level Excel functions and web- and Java-based software to gather and analyze data in 2006, Medina worked with his advisor, Associate Professor of Mathematics Jeff Forrester to learn and use the latest iteration of R—powerful code used by data scientists—to create a data set illustrating the interaction of key genes.

“That was the most influential moment in my life, as a learner,” says Medina, who came away with an up-to-date data-wrangling skillset in a rapidly expanding field.

Nowicki and Medina’s shared story begins at the April 2018 AACR conference. Medina and fellow student-researchers were presenting a poster outlining their latest findings, and Nowicki stopped by to say hi to his former professor and catch up on the latest developments.

“When Scott introduced himself and said he was at UCLA, it was a perfect moment,” says Medina, then weeks from graduation day, “because his work was so interesting, and I wanted to make professional contacts in Los Angeles, my hometown.” Back on campus, Medina followed up with an email to Nowicki, outlining his cross-disciplinary skills.

“Egmidio’s background in math and computational analysis with a biological focus is a big plus to a research team,” said Nowicki, who leads a cancer-research project at UCLA, in collaboration with the Edythe Broad Center of Regenerative Medicine and Stem Cell Research’s Antoni Ribas. “So when the opportunity came up, we hired him.”

Funded by a $4.6 million grant from the California Institute for Regenerative Medicine, the cancer-research trial tests a novel treatment for advanced sarcomas and other cancers with the NY-ESO-1 tumor marker. The method: to genetically engineer each patient's blood-forming stem cells to produce cancer-fighting immune cells.

The Dickinsonians have worked together on several projects and have co-published a paper. And after seeing Nowicki treat pediatric patients with cancer and offer hope to their families, Medina is considering medical school.

“It’s been amazing working with Scott,” he says. “I owe so much to him. I tell him every day.”

“Egmidio has a great attitude and personality, and he does stellar work,” Nowicki says. “I’m just glad, for both of us, that it turned out the way it did.”

Learn more about how Dickinson students regularly blend complex math and science to do the kind of cancer research normally only available to graduate students.