The Next Generation of Cancer Researchers 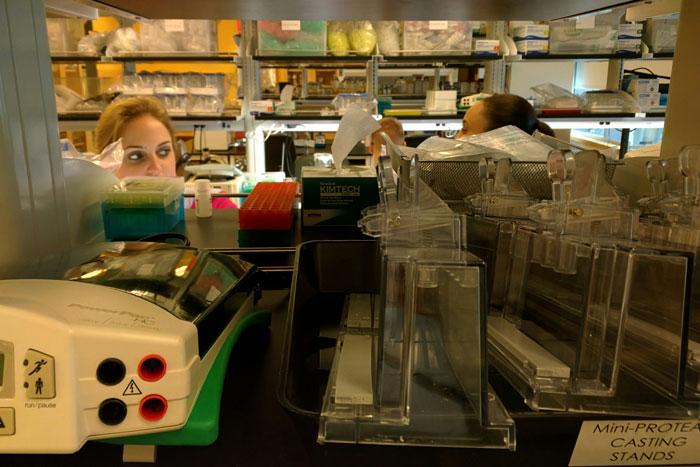 Abigail Marriott '16 (left) and La Niece Carpenter '16 have been keeping busy in the lab this summer. Photo by Tony Moore.

No one thinks conducting cancer research is a simple undertaking. But with technological advances, ironically, it’s become increasingly complicated in recent years.

“Biology has become much more computational,” says Associate Professor of Biology Mike Roberts, whose research interests lie heavily in leukemia studies. “And it's largely because the techniques that we have now generate really large data sets, which you can't analyze by inspection."

“One of the unique things about this research is that students not only get to collect the data, but they also learn how those data are analyzed and how to form mathematical models that help to describe the physical systems,” Forrester says. He notes that students are involved in every step of the research process—growing human leukemia cells, performing the experiments, analyzing the data that the experiments generate and interpreting those data as to what they’re saying about the cells' genetic network.

“I wanted to come here and do cancer research,” says Abigail Marriott ’16 (biology), who sees herself pursuing a career as a clinical oncologist, “so it's great to be exposed to all the technology that's used and be hands-on with it.”

“We're training students to do science, to think like scientists,” says Roberts, “and that's best accomplished if students are directly involved in the research and in doing research that they find interesting and important.”

“Cancer hits close to home,” says La Niece Carpenter ’16 (biochemistry & molecular biology), who says she knew she wanted to do this kind of research after taking Roberts’ Understanding Cancer class. “I've grown up seeing what cancer does, but I never really understood what cancer was. That class made me interested in the mechanisms of the disease.”

Like Marriott, Sam Eaton '17 (biochemistry & molecular biology) plans on going into oncology, and the summer research has been a fascinating project. “Working with leukemia or any cancer cell line is interesting,” he says. “And with research like this, I get to see what goes on behind the scenes of practicing medicine.”

Along with 18,000 other researchers, the students attended, and gave presentations at, the annual conference of the American Association for Cancer Research (AACR) in April and will attend the 2016 event as well. It didn’t take long for Cassie Holbert ’16 (biology), who presented individually at the conference, to figure out that she was among the select few.

“There were maybe 300 undergrads out of the 18,000, so it's very uncommon to go as an undergraduate,” says Holbert. “I’m interested in clinical research, so, all around, this project has become even more important in my career plan than I thought it was originally.”

And at its heart, that’s the idea behind this summer research.

“We're trying to create the next generation of cancer researchers,” Forrester says. “And these things will carry over into graduate school or any related field they enter after they leave Dickinson.”