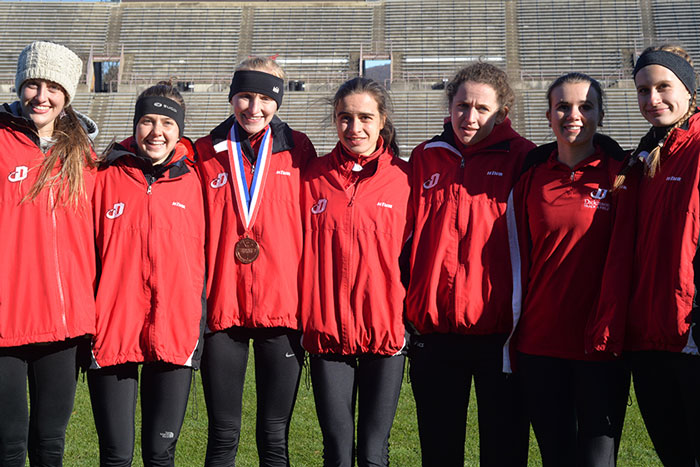 Isabel Cardi '21 (third from left) was named 2019 Centennial Conference Women's Cross Country Runner of the Year, among a slew of other honors.

When the Red Devil women's cross country began the season ranked No. 2 in the NCAA Mideast Regional and No. 13 in the opening national poll, it was clear some good things would happen this season. And the team, and Coach Don Nichter, didn’t disappoint.

On a team filled with great runners, Isabel Cardi ’21 stood out in 2019, closing the season by running to All-America honors with a bronze third-place finish at the NCAA Women's Cross Country National Championships. This comes just weeks after Cardi was named 2019 Centennial Conference Women's Cross Country Runner of the Year and won individual titles at the Little Three, Centennial Conference and Mideast Regional meets

Dickinson women's cross country team reached the NCAA championships by taking second at the 2019 NCAA Mideast Regionals, where Cardi dominated the field of 360 runners and took the individual championship with a time of 20:38. She finished almost a minute ahead of the pack and was one of four Red Devils to run to All-Region honors.

Learn more about athletics at Dickinson.