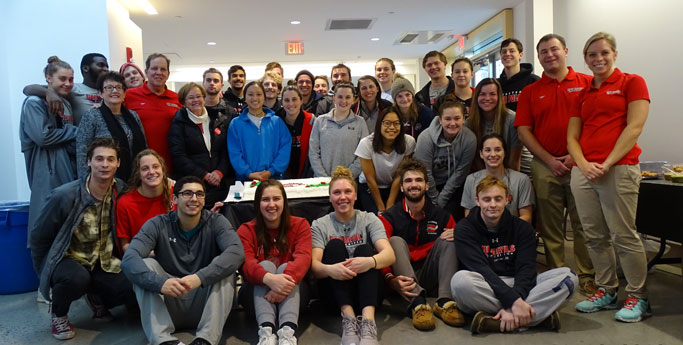 Joined by family, friends and alumni, along with President Margee Ensign and Joel Quattrone, director of athletics, the parents of Dickinson swimming honored coach Richards for his remarkable accomplishment and dedication to the program for the past 25 seasons.

When the Red Devil women swimmers defeated Bryn Mawr College on Nov. 8, it was a sweet victory for the team and for Coach Paul Richards. The win raised the team's season record to 4-2, but for Richards, it was a true milestone, as it marked 500 career wins.

Richards has been with Dickinson since 1994, and the men's and women's programs have accumulated a combined record of 368-194-1 under his watch, while also achieving consistently high marks academically. The women's program has received Scholar All-American honors in every semester under Richards, while the men put together a streak of 48 consecutive semesters of receiving the prestigious academic honor.

The win raised Richards' overall mark to 500-319-2, with 132 of his career victories coming during stints at Hartwick College and Mary Washington.