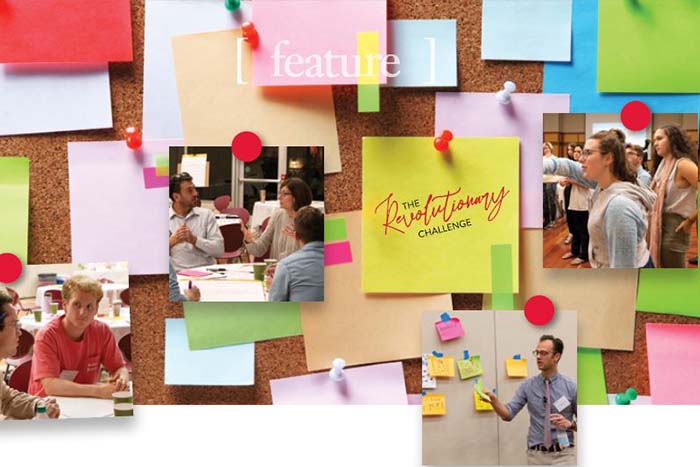 The Dickinson community has responded enthusiastically to the Revolutionary Challenge with 49 proposals ranging from an interdisciplinary data analytics initiative to a comprehensive student leadership program. The proposals for the high-level idea competition President Margee Ensign launched this spring then received feedback from more than 3,400 alumni, parents, faculty, staff and students during an online review period in early October.

“It’s been quite impressive to see the inspired thinking that has emerged from our community during this process,” says Ensign, who unveiled the challenge in April to generate new ideas for using Dickinson’s useful liberal-arts education to address the world’s most pressing challenges. “I believed that the best way to innovate was to ask our community. Dickinsonians routinely cross disciplines, think differently and act boldly. Based on the response, I’m happy to say that our alumni, parents, faculty, staff and students have more than justified that belief.”

Using the feedback from the global Dickinson community, the Board of Trustees and a newly formed President’s Panel on Innovation (PPI) met on Friday, Oct. 25, to choose the Revolutionary Challenge finalists.

“The rankings and comments we received were critical in helping us narrow down the proposals to the strongest projects,” says Jennifer Ward Reynolds ’77, PPI chair and trustee. “It’s been deeply satisfying to see Dickinsonians from all over the world get behind this effort.”

Formed this summer, the PPI is a body of 14 innovative entrepreneurs, leaders and educators selected by Ensign to guide the college through the completion of the Revolutionary Challenge. The PPI is charged with evaluating challenge submissions, mentoring selected teams and working with the Board of Trustees to identify the finalists.

Understanding that innovation isn’t something that simply happens, the college also hosted an ideation workshop in September to help community members surface and develop ideas as they prepared their proposals for the Oct. 5 deadline. Conducted by Parke Rhoads ’99, a principal of Vantage Technology Consulting Group and an expert in technology design and strategic planning, the workshop was attended by more than 30 faculty, staff and students and viewed online by more than 200 Dickinsonians. As a result, proposals were informed by strategic thinking and collaboration, which, according to Rhoads, is essential to creative thinking.

“Sometimes it can be so tempting and easy to say, let’s just go build something or buy something,” he explains. “But it’s more about seeking that true innovation, which is, let’s go learn something.”

“This is an exciting time for Dickinson,” says Ensign. “Benjamin Rush founded this college to address real-world problems, and we’ve already taken a leadership role in impact-driven higher education through global study, sustainability and civic engagement. Now is the time to determine the next bold initiatives that will enable us to continue to deliver on Rush’s revolutionary promise and propel us boldly forward into the future.”

View the finalists and get the latest on the Revolutionary Challenge at dickinson.edu/revolutionary.