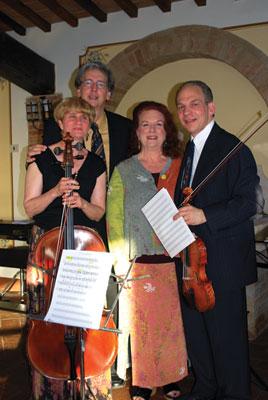 Charles Abromovic (piano) has won critical acclaim for his international performances as a soloist, chamber musician and collaborator with leading instrumentalists and singers. As a studio recitalist he has performed in major cities throughout America as well as in France and Yugoslavia. He also has performed at major international festivals in Berlin, Bermuda, Dubrovnik, Vancouver, Asolo (Italy) and Newport, R.I.

Mr. Abramovic made his solo orchestral debut at age 14 with the Pittsburgh Symphony. He has since appeared as soloist with numerous orchestras including the Baltimore Symphony, the Colorado Philharmonic, the Florida Philharmonic, and the Nebraska Chamber Orchestra. Actively involved with contemporary music, Abramovic has recorded works of Milton Babbitt, Joseph Schwantner, Gerald Levinson, Tina Davidson, and other composers for the CRI, Bridge and Koch International labels.

Mr. Abramovic is associate professor of keyboard studies at Temple University's Boyer College of Music in Philadelphia. He received the 1997 Career Development Award from the Philadelphia Musical Fund Society. He is a graduate of the Curtis Institute of Music and the Peabody Conservatory. Abramovic received his doctorate of musical arts from Temple University. His teachers have included Leon Fleischer, Natalie Phillips, Eleanor Sokoloff and Harvey Weeden.

Ida Faiella (soprano) is the founder and executive artistic director of L'Ensemble and a member of the music faculty of Bennington College. She has enjoyed successes in clasical, popular music and jazz genres. She had her own radio show at age 11, and, as a young singer, performed with big bands. As an opera major at the Hartt College of Music, she worked in well-known jazz clubs with bassist Ron McClure. Her early musical collaborations were with jazz musicians such as drummer Paul "Motion" Motian and singer Sheila Jordan. She recently was invited to present a retrospective concert of American popular music in Tanglewood's Ozawa Hall.

Faiella has performed from New York City's Lincoln Center to halls in rural areas, and from Moscow to Paris. The New York Times wrote that she "sings with considerable intelligence and an apt intimacy and warmth." The Albany Times Union wrote, "Faiella sang Schubert from the heart as well as the head. Her profound sense of the little dramas of each song made a powerful impact." In another Times Union review, Ron Emery wrote, "The score required Faiella to sing, speak, chant, shout, croon, and act! She was outrageously wonderful."

Barry Finclair (violin) is a former member of the New York Philharmonic, Mr. Finclair has been a member of L'Ensemble since 1973. He attended New York City's School of performing Arts, the Juilliard School of Music, Mannes College of Music and the University of Southern California. At age 13 he was selected by Leonard Bernstein as soloist on the nationally televised New York Philharmonic Young People's Concerts. His awards and prizes include first place in the Merriweather Post Competition.

Finclair has appeared as soloist with the National Symphony Orchestra in Washington D.C. He has toured with the Metropolitan Opera Orchestra and The New York Philharmonic Orchestra while playing with them at their Lincoln Center homes. He performs chamber music concerts on a regular basis and recently as the soloist in the Beethoven Violin Concerto in New York City Parks Concerts. He also has played with such artists as Stevie Wonder and Aretha Franklin and his work appears on hundreds of recordings. Recently he was concertmaster of the new recording of "Follies," conducted by longtime Sondheim collaborator Jonathan Tunick. Finclair appears regularly as concertmaster on nationally televised programs.

Finclair has performed in many of Julie Taymor's productions; "Juan Darien" at Lincoln Center (1996), "Lion King" at the New Amsterdam Theater (1998) and "The Green Bird" at the Cort Theater (2000). He also performs regularly with the Broadway production of "Chicago" at the Shubert Theater. In film, Bruce has been a featured soloist in many of Elliot Goldenthal's film scores; "Butcher Boy," "In Dreams," "Titus" and "Frida Kahlo." Healso was featured with the American Ballet Theatre Orchestra in Goldenthal's 1997 ballet "Othello" (choreographed by Lar Lubovitch).