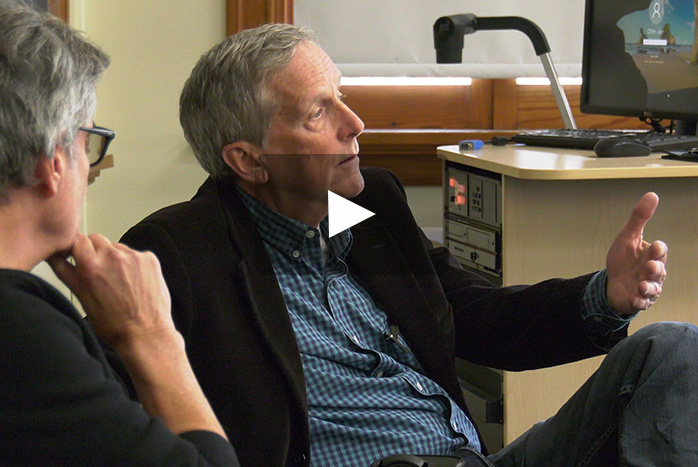 Joel Reynolds, NRDC (Natural Resources Defense Council) western director and senior attorney recently met with students, joined class discussions and delivered a lecture as part of the Sam Rose ’58 and Julie Walters Prize at Dickinson College for Global Environmental Activism, which was awarded to NRDC in May 2019. The $100,000 prize is given annually to an individual or organization that makes a defining difference and advances responsible action on behalf of the planet, its resources and its people. Earlier this year, at Commencement, Reynolds accepted the prize on NRDC’s behalf along with actor, environmentalist and longtime NRDC supporter Pierce Brosnan.

"We exist to protect the environment for people and for wildlife," said Reynolds. "We believe environmental protection is a fundamental right."

In addition to the lecture, "Crisis: Climate Change, Biodiversity Loss, and the Pebble Mine," Reynolds and Jacob Scherr, a member of NRDC’s Global Leadership Council, led students, faculty and staff through a two-hour workshop focusing on the challenges of environmental advocacy at the international level. "Building an International Environmental Campaign Workshop with NRDC" featured an in-depth analysis of the strategic elements that NRDC has used in its international campaigns to protect Alaska’s Bristol Bay from a devastating mineral exploration project known as Pebble Mine and preserve the World Heritage Site and Biosphere Reserve at Laguna San Ignacio in Baja California Sur, the last undisturbed breeding and calving lagoon for the Pacific gray whale. With insights gained from these campaigns, faculty and students were invited to consider a new campaign to protect Light House Point, a natural treasure at the southernmost tip of the island of Eluthera in the Bahamas that is threatened by a proposal by the Disney Corporation to develop a massive cruise ship port.