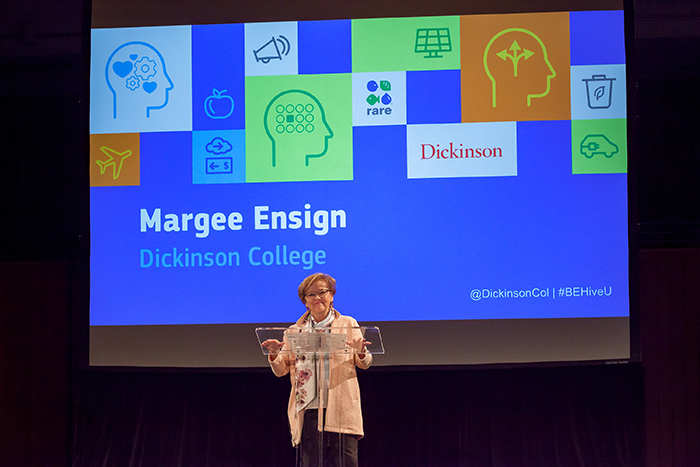 President Margee M. Ensign discussed Dickinson's nationally recognized leadership in sustainability education and sustainable campus operations at last month's BE.Hive Summit co-hosted by Dickinson and Rare. She is speaking out about the White House's decision to begin withdrawal from the Paris Agreement on Climate Change and is one of more than 350 college leaders who say, "We Are Still In."

Dickinson College, a nationally recognized leader in sustainability education, stands with the “We Are Still In” bipartisan coalition of nearly 4,000 leaders of cities, states, tribes, businesses, colleges and universities, healthcare organizations and faith groups that strongly oppose a U.S. withdrawal from the Paris Agreement on Climate Change. In reaction to yesterday’s announcement by the White House that it will start a complete withdrawal from the Paris Agreement, Dickinson President Margee M. Ensign reaffirmed the college’s commitment to educate a workforce for a green economy and continue to act as stewards of our nation’s students and their future.

“Through energy efficiency improvements, shifts to cleaner, renewable sources of energy, and investments in carbon offset projects, Dickinson is reducing its net emissions of carbon and other greenhouse gases to zero. We will, this year, be one of the first zero-carbon colleges in the world. This work is critically important and must continue for the sake of our students and the planet. We demand more of ourselves,” said Ensign.

Dickinson sustainability scholars say the costs of withdrawing from the Paris Agreement are enormous and unsustainable for the United States while more than 190 nations are moving forward with the agreement. “The rest of the world is investing in innovative technologies, infrastructure, energy sources, knowledge and skills that are creating businesses, jobs and economies for the future that are less wasteful, more efficient, more profitable, less polluting and more equitable,” said Neil Leary, director of Dickinson’s Center for Sustainability Education and former senior economist for the Environmental Protection Agency. “If U.S. policies and laws continue to distort markets in favor of last century’s energy sources and technologies, the rest of the world won’t want to buy America’s cars, equipment and other products. They won’t want to employ America’s engineers, designers, architects and builders. We will fall behind and will be poorer because of our failure to step up to the challenge of climate change.”

Dickinson is among more than 350 U.S. colleges and universities that have joined the We Are Still In coalition since it formed in 2017. Standing with Dickinson in vocal opposition to the planned withdrawal are some of the world’s most respected environmental advocates and winners of Dickinson’s Rose-Walters Prize for Global Environmental Activism.

“Abandoning the Paris agreement is a grave and reckless mistake for which our children and future generations will pay a frightening price. Climate change is happening, and it won’t be solved without a global effort. It won’t be solved without U.S. leadership. It won’t be solved as long as the world’s second-largest climate polluter is walking away from the climate pledge it made to the rest of the world.  Science is telling us that denying the reality of climate change is a prescription for a terrible transformation of the world as we know it.  Ignoring our country’s responsibility is certain to leave our children a world of rising seas, vanishing species, widening deserts and raging wildfires, storms and floods. We can’t let that happen.”

“Withdrawing from Paris is indefensible—the biggest carbon emitter in the planet's history is also the only nation that won't join the global effort to solve the climate crisis. Trump’s action means the rest of us have to organize harder and build even bigger movements so we can still make some progress."

—Bill McKibben, author and environmentalist and founder of 350.org, the first planet-wide, grassroots climate change movement, which has organized 20,000 rallies around the world in every country save North Korea, spearheaded the resistance to the Keystone Pipeline, and launched the fast-growing fossil fuel divestment movement; McKibben received the inaugural Rose-Walters prize in 2012.

“It boggles the mind to know that thinking people could possibly be willing to blithely ignore the well-documented danger of ongoing climate change. It is a clear and present danger, now and forever. But industrial, political and financial interests have shown themselves all too willing to abandon truth in favor of sabotaging this Earth for the sake of immediate venal interests. It is a great tragedy of our era. Young Americans are clear on that point. Older Americans are too. And the as yet unborn people of the distant future will look at our history with shock and horror, shaking their heads in utter bewilderment that our society and governing systems could have gotten it so wrong. The government leaders responsible for our course of non-action, including the current occupant of the White House, will rightly be judged to have failed us at this critical juncture.”

—James Balog, photographer and founder & president, Earth Vision Institute and Extreme Ice Survey (EIS); Balog is the 2014 recipient of the Rose-Walters Prize; Balog and the EIS team were featured in the 2012 internationally acclaimed documentary Chasing Ice, which won an Emmy Award in 2014 and was short-listed for an Oscar.