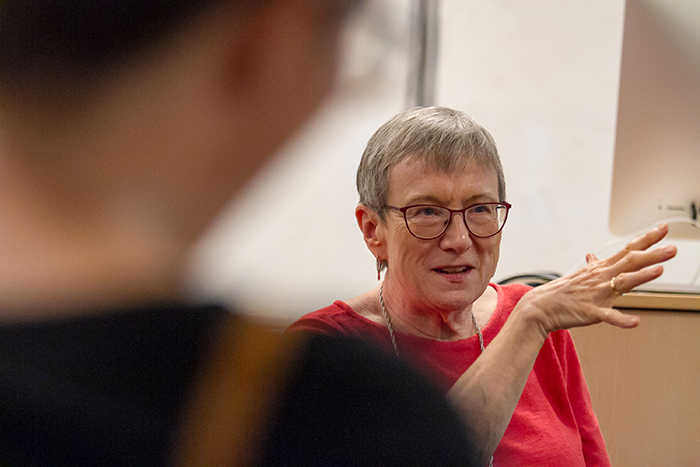 Coming into Dickinson as a first-year, Linda Dalrymple Henderson ’69 planned to major in math, so it was a surprise to discover that the subject that most set her imagination aflame was in a very different field.

“I just fell in love with art history, and I went to see the head of the department to talk about the art history major,” Henderson remembers. “He very cleverly suggested that I could combine my interest in science and math with art history, showing me an article on proportions in Greek sculpture. It was excellent advice, because it has allowed me to work across fields that most art historians are reluctant to explore.”

Today, Henderson is a major contemporary figure in art history, specializing in the intersections between visual art and math, science, technology and occult philosophies. She recently visited campus to deliver a public lecture about her work and career, and to interact with students, inside and outside of class.

Henderson earned her master’s degree (1972) and doctorate (1975) at Yale, where she met her husband, George, then a law student. A graduate paper steered her toward scientific metaphors in art criticism, while George’s career steered the couple to Texas. Henderson was curator at the Museum of Fine Arts, Houston, for several years before entering the art-history department at the University of Texas at Austin in 1978, where she remains. In addition to her courses on modern art, she now teaches an undergraduate, interdisciplinary seminar on the “fourth dimension” in art and culture—an area for which she’s well known, because of her dissertation/book The Fourth Dimension and Non-Euclidean Geometry in Modern Art (Princeton University Press, 1983; new, enlarged ed., MIT Press, 2013).

Henderson’s research focuses on early 20th-century culture as the backdrop for modernism, especially the public’s widespread fascination with invisible realities such as a possible fourth dimension of space. That idea was supported by emerging scientific discoveries and technologies like the X-ray machine, making visible what the naked eye could not see. This was the crucial context for art created at the dawn of the 20th century—before 1919, when Einstein’s Theory of Relativity became known to the masses and the fourth dimension was redefined as time. Along with the key role of radioactivity, she introduced the theme of ether vibrations as stimuli for modern artists, and coined the term “vibratory modernism.”

“People understood that there was an entire spectrum of waves that were invisible, and for an artist, that was liberating and exhilarating,” she says, explaining that artists now were inspired to capture not only what they could see in front of them but also the electromagnetic waves, spiritual energies and other phenomena that couldn’t be captured by the human eye.

In addition to Fourth Dimension, Henderson is the author of Duchamp in Context: Science and Technology in the Large Glass and Related Works (Princeton, 1998), which received the 1999 Robert W. Hamilton Author Award, and co-editor of the interdisciplinary anthology From Energy to Information: Representation in Science and Technology, Art, and Literature (Stanford University Press, 2002). She is currently working on a book titled The Energies of Modernism: Art, Science, and Occultism in the Early 20th Century.

“Being able to talk with an alumna who has become such a recognized art historian was reassuring, as I think about my future career,” said Emma Larson-Whittaker ’21, an art & art history major who attended the lecture and also interacted with Henderson in small group discussions during class and over lunch.