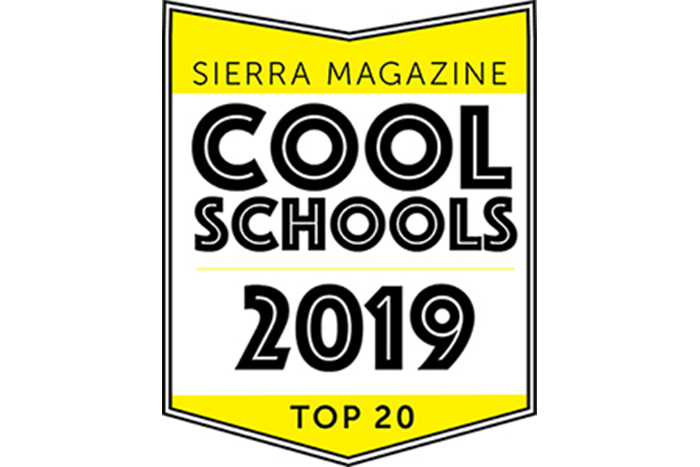 Today, Sierra magazine announced its 2019 Cool Schools ranking, and Dickinson is again a top performer, earning the No. 12 spot among a record 282 qualified four- and two-year institutions across the U.S. and Canada. Just one week ago, it was announced that Dickinson also earned the No. 2 spot in the top-performer category among baccalaureate institutions on AASHE’s Sustainable Campus Index.

“It’s always so exciting to see the hard work we have collaboratively put in to advance sustainability here at Dickinson pay off,” said Lindsey Lyons, assistant director of the Center for Sustainability Education. “In 2020, we will declare carbon neutrality, and our innovative efforts over the past 10+ years in operations, academics, research, engagement and student life have allowed us to remain a leader and prepare for this milestone.”

Sierra has been highlighting best environmental practices for colleges and universities for 13 years. Its rankings are based on an institution's Sustainability, Tracking, Assessment & Rating System (STARS) scores; Dickinson’s report is publicly available on the STARS website. Using a customized scoring system, Sierra’s researchers ranked colleges and universities based on academic criteria; student engagement with environmental activism; operations, such as renewable energy generation and waste management; and schools’ planning and administrative standards. Each of the schools ranked in the top 20 has displayed a deep and thorough commitment to protecting the environment, addressing climate change and encouraging environmental responsibility through its curriculum and on-campus operations.

“We’re inspired by the creative and innovative ways colleges and universities across North America are working to tackle the climate crisis and move toward a sustainable future,” said Jason Mark, Sierra magazine’s editor in chief. “Each year, our rankings have shown increased commitments to clean energy, more creativity on waste reduction and involvement from a greater geographic range of schools."

The 2018-19 academic year saw many achievements in sustainability education and sustainable campus operations: