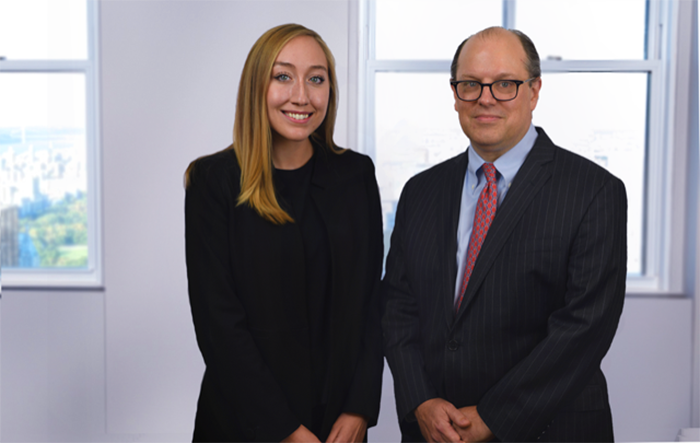 Two Dickinsonians work together at a top global financial-advisory and asset-management firm. The manager took an indirect route, majoring in philosophy and switching careers before rising up the ranks in finance. The analyst, a former international business & management major, chose her path early on. Both say that the liberal-arts educations they received at Dickinson two decades apart helped set them apart from the crowd.

Holcombe Green III ’92, the philosophy major, was active on campus, and he enjoyed nearly all his classes. But it’s the classroom discussions in his major subject that stand out to him most. “I learned how to write well, and I liked the questions that those classes inspired,” he remembers. “Arguing logical points in a small group and writing humanities papers, I developed a clarity of thought process that has been very helpful to me over time.”

After graduation, Green secured an entry-level job in the Washington, D.C., office of Sam Nunn, then a senator in Green’s home state of Georgia. Green enjoyed the work, and within three years, he was supervising eight employees. But on realizing that he didn’t want to run for office—the next logical career move—he pivoted, enrolling in the Yale School of Management in 1995.

Green was hired by Merrill Lynch while still in grad school, and by the time he left the company, four years later, he was vice president. His next step: a newly created directorship at IBM, acquiring a business in India on the tech giant’s behalf. In 2004, Green transitioned to Lazard Freres, where he’s a managing director.

After he received an email from a fellow Dickinsonian, a generation younger, he set the wheels in motion to add a member of the class of '18 to his team.

Learning how to think

As a high school student, Zoe Kaminski ’18 knew that she loved numbers, foreign languages and working with people. Dickinson’s international business & management program was a natural draw. “I also knew that I wanted to go to a liberal-arts college, because I was interested in taking courses outside of the business major, and I liked the idea that a liberal-arts school taught you how to think,” she says. “I thought it would provide me with a good foundation for a business, or any, career.”

On campus, Kaminski got involved with Student Senate, the Student Investment Group, the Arts Collective, volunteer trips and Farm Cook Eat. She also took advantage of as many lectures and special events as she could and served as senior-year class president. During her junior year, she studied abroad in Toulouse and conducted an original research project as an intern at BlueSky Investment Management (headed by Bud Sturmak ’95) through Dickinson’s New York program.

Through BlueSky and the Student Investment Group, Kaminski embraced the chance to network with Dickinsonians in finance. Using the college’s alumni directory, she emailed Green at the start of her senior year, and she soon was invited to do a phone interview with two people on Green’s team.

“I was very impressed with her resume and her note,” says Green, who passed on her name for consideration for a junior-analyst position. After a group interview in New York and a follow-up interview in December, Kaminski was hired onto Green’s team at Lazard Financial Advisory.

As an investment-banking analyst at Lazard, Kaminski says the communication skills she learned in class and while studying abroad help her on the job every day, and she believes that the broad spectrum of courses she took at Dickinson helps her problem-solve more effectively across all aspects of life.

“I took computer science, environmental science, political economy of gender and astronomy, and the thing all of those subjects have in common is a way of defining the human experience,” she says. “It taught me how to go into situations with an open mind, listen to other people, build relationships and see different sides of the story, so I can approach and solve problems from different perspectives.”

Green agrees and adds that this useful set of skills can give an edge to liberal-arts grads in business and technical fields.

“Liberal-arts graduates are the most educated people over time; the education has longevity,” he says, noting that the ability to truly write well and lay out a logical and persuasive argument has helped him at every stage of his career. “It gives you the foundation for building a successful life.”